To celebrate APAHM and the launch of our new name, Character Media, we’ll be sitting down with notable Asian American creatives working in entertainment for a series of Q&As during the month of May.

Aminder Dhaliwal (@aminder_d) captured the internet’s attention with “Woman World,” nominated for a 2018 Ignatz Award for outstanding online comic. Inspired by the Women’s Marches that took place worldwide in 2017, her charming illustrations depict a post-apocalyptic world inhabited solely by women—nudist city mayors, love-stricken teens, doctors with mastectomy scars. Her comics are simple, and don’t follow one singular plot or story, suggesting the funny and at times harrowing possibilities of life in a woman’s world.

Dhaliwal grew up in Brampton, Ontario but moved to Los Angeles in 2011 after graduating from the animation program at Sheridan College. She worked at Nickelodeon and Cartoon Network before moving to Disney, where Dhaliwal is president of their television animation department. Currently, she’s working with Felicia Day to develop “Woman World” into a Freeform TV series.

Can you tell me a little about your background and how you got into drawing and illustration?

I’ve been into drawing for as long as I can remember. It’s been a life-long hobby. I think a lot of illustrators identify with “being the artist” in a group of friends in middle school and high school. My art was the scope of my identity back then, it was what I felt I offered my friends. I was the kid who could draw that funny comic about a teacher, or the kid you wanted in your science project group because she could do the illustrations. I liked having it as an identity, there’s a safety there.

On a more personal note, my motivation to make art came from fandom. I was in my early teens and making a lot of fanart of the “Harry Potter” series, and at the same time discovering huge online communities of people doing the same. I was drawing fan art of my favorite video games, TV shows, books and movies and it connected me to a larger community.

What other kinds of art do you work on besides your popular webcomics?

I draw a lot for myself, what I post online is only a fraction of the art I make. But the type of art I make is all in the same realm, ink on paper, digital, rough-work. I don’t really do “finished” pieces you can pop into a frame and hang, I’ve always been rough. I like writing as well, so both of those interests converge in comics.

What projects are you working on with Disney?

I recently worked on [the upcoming show] “The Owl House” at Disney. Before that I was at Cartoon Network and before that at Nickelodeon! I’ve worked on a lot of really cool projects over the span of my career.

Asian families can notoriously have very traditional career expectations. Did you ever experience that with your own family, or were they more supportive?

My mom and family have always been incredibly supportive of my career choice. Although my siblings chose more traditional career paths, they’re both very creative. I think my mom wanted one of her children (there’s three of us) to be a doctor, but since my sister has a PhD, I think that counts on a technicality?

Can you tell me a little about the inspiration and process behind “Woman World?”

“Woman World” started after the 2017 Women’s March. I saw so many “The Future is Female” signs that day. I thought it would be a fun comic idea. I especially wanted to convey the tone of the Women’s March. It was such a nice and chill, feminist day (considering the events leading up to it) and I wanted to make a nice and chill feminist comic. Soon after the march I sent a draft of the first comic to friends. After I got their go-ahead, I posted it on Instagram.

My process is quite simple, I wait for something which interests me—a concept or idea—and take note of it. Some weeks I have more of these (I keep a journal), then I brainstorm a joke or story around the topic. I experiment with different characters and versions until one resonates with me. I work on Post-it notes, the square format translates perfectly to Instagram. When I have a basic idea fleshed out, I draw it out as panels on Post-its and then move around or remove panels. Once I have something I like, I take it to Photoshop, clean up the drawings and then add in a final pass of the wording.

Do you think you’ll turn your latest cyclops webcomics into a book as well? Or is that something more done for fun?

I honestly don’t know, I’m trying not to think too far ahead. “Woman World” feels like it was such a blur and most of my joy came from the creation of the work, so I’m trying to enjoy that phase again!

Can you tell me anything about the adaptation of “Woman World” to a TV show?

I’m so happy Freeform wanted to develop the idea. It’s been a really great experience working with them so far!

Are there any projects you hope to work on in the future?

So many of my friends are making so much cool stuff lately, I wish I could work on all of it. I have a couple ideas of my own floating around as well, and mostly it’s about finding the time to devote to them.

You can purchase “Woman World” here. 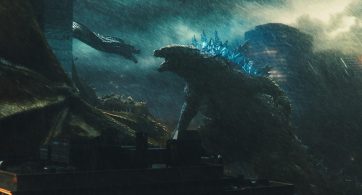 The story for “Godzilla: King of the Monsters” is the flimsy tortilla chip that scoops up the guacamole of the film’s monstrous battles. The latest installment to the legendary […]