From “The Breakfast Club”’s Andrew Clark to beloved “High School Musical” basketball star Troy Bolton, the so-called “dumb jock” archetype has been a staple of teen-centered media for decades. It’s no surprise why—these kinds of characters bring an endless amount of entertaining possibilities to film and TV storylines, as antagonists, comedic side characters and even possible love interests. Oh, and of course, they tend to be eye candy for viewers.

But few play the role as charmingly and with as much depth as Darren Barnet. Since 2020, he’s starred in the Mindy Kaling-created series “Never Have I Ever” as Paxton Hall-Yoshida, the popular, yet maybe a bit academically dull, love interest of protagonist Devi Vishwakumar (Maitreyi Ramakrishnan). But if you ask Barnet (and us), over the show’s three seasons, Paxton has grown out of the dumb jock trope to become a complex and nuanced character with a meaningful arc all his own.

After the third season’s release on Aug. 12, Barnet joined Character Media to share his thoughts on Paxton’s growth, his own high school experiences and what’s in store for him outside of “Never Have I Ever.”

What made you want to become an actor?

Well, the first thing I wanted to be was Albert Einstein and Michael Jordan at the same time, and I was told I could do that. But when I said I wanted to be an actor, that’s when people said, ‘You might want to have a backup plan.’ So I was very confused. I can be the most brilliant scientist and greatest athlete of all time, but I can’t be an actor?

That enticed me a lot more to do it. Other than that, I’ve wanted to since I was 5. Jim Carrey and Jackie Chan are two people that really made me have my heart set on [acting]. I would watch their blooper reels and think, ‘This is the funnest job of all time. I have to do this.’

As a mixed Asian American person, did you ever encounter difficulties navigating a career path in entertainment?

Honestly, it kind of works to my advantage because I’m more ambiguous-looking to most people. I’ve never placed in a box. I’ve been able to go out for a lot of roles that are completely different from what I am, but that I can pass for. I’m very proud of my heritage and I’ve never minded it.

As you’ve played one of the rare Asian American male love interests in film and TV, did you ever worry that taking on the role of Paxton would box you in?

I wasn’t scared. I was prepared for it, like, if that’s the part I needed to play, then that’s my job as an artist. But [the ‘Never Have I Ever’ creators] haven’t done that, and it’s been great. It’s made for an even better show. As for myself, I’m not really scared because I have other things I’m working on. I have a movie with a couple of friends that I’m starring in, that is completely a different side of me as an artist. That’s something I always attempt to do on my own time; I love to expand and show different facets of myself as an actor.

What’s in the future for you, career-wise? Is there a particular genre you want to try or a type of character you want to portray?

I want to do some deep, dark, gritty thrillers and some nice dramas. Maybe some dark comedies. I’m always open to comedy, but I really want to sink my teeth into something gritty and juicy. I want to be unrecognizable on screen. It’s a cliché answer, as an actor, but it’s something I want to do. 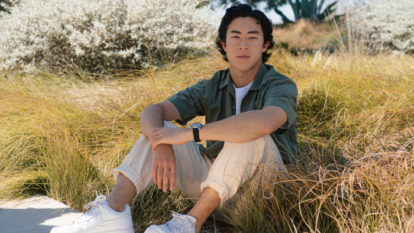 The three-time World Champion shares his journey to the 2022 Olympic podium, and gives us a look at what’s coming up next.