When I think of the word artist, I think of Vincent Van Gogh seizing a blank canvas with bold strokes of color. I picture Ludwig Van Beethoven pouncing on the keys of a grand piano. I envision 50 Cent rapping about guns while holding a really big gun. Yes, I see the
masters at their craft, doing what they do best.

Despite the fact that I’m a talented actor, writer, rapper and hair stylist, the title “artist” was one that I could never wholeheartedly embrace. It felt too presumptuous, too pretentious. I was not worthy. But at a certain point, I had to look myself in the mirror, take a deep breath, swoon at the rugged exterior, re-focus and make the declaration: “I AM AN ARTIST.” Then, came the next step—telling my parents.

If you’re of Asian descent, and you’re not a doctor or a lawyer and your first name is not P.F., there is a good chance that your parents are disappointed in you. For many years, you followed their playbook: You did well in school, went to a good college, med school … and then one day, in the middle of your crappy residency, you came to a realization: “Saving lives is great and all, but I just wanna dance!”

Believe me, I went through it. And so the next day, or week (or in my case, years later), came “the talk”…

Randall: Mom, Dad, I have to tell you something.
Mom: You’re gay.
Randall: First off, I’m not. Secondly, maybe I am, I don’t know, I’m confused. But that’s not what I wanted to talk to you about.
Dad: Then what is it?
Randall: (Deep breath, then—) I’m not going to be a doctor or a lawyer. I am an artist. I am an actor, writer, rapper… Mom, please stop crying.

Yes, my parents were beyond disappointed. They had no faith in me. “You are NOT an artist!” they’d say. “You’ll never make it! It’s too hard for Asians! Do something else! Open a kogi taco truck! I know itsounds weird, this being 1999 and all, but I have a feeling those will do really well some day! Just don’t do anything in the arts!”

But I had no choice. I am who I am. So I would begin my journey without them. I paid for my own acting classes, sought advice from other artists and leaned on the shoulders of friends. From time to time, things would get difficult. I’d go on long stretches without work, without auditions even. I was broke, cursing the ATM for not letting me withdraw coins. I took a job at Starbucks. And while making some jerk’s tall latte with extra foam, I’d wonder if maybe my parents were right.

I’d look at my white peers, like my friend Dirk, and see how different things were on his side of the fence. The day he booked his first job, his parents threw him a party. The whole family was there. We sat around the television to watch his performance, and I will never forget the pride in his mother’s eyes. She could care less that it was p-rn. She loved her son. That’s all that mattered. And I didn’t have any of that. Or so I believed.

Now that I’m wiser, I’ve come to understand why my parents were so disappointed in me. It’s because they love me. They love me so much that they themselves had dreams for me. They wanted me to be successful, financially stable and married to a beautiful Korean woman. They wanted me to be happy. And in the most ironic of twists, all of those things came true. Because just as they did when they left Korea for the United States, I took a leap of faith. I followed my own dreams.

Dad: I saw you on TV again! You were funny!
Randall: It’s not that big a deal.
Mom: But you’re doing so well! We’re so proud of you!
Randall: Thanks, guys.
Parrot (on Randall’s shoulder): Squawk!

Now, you’re probably wondering why there was a parrot on my shoulder.
It’s because I’m an artist. We do weird sh-t.

Randall Park lives in Mar Vista, CA with his wife Jae. He is currently listening to Das Racist. 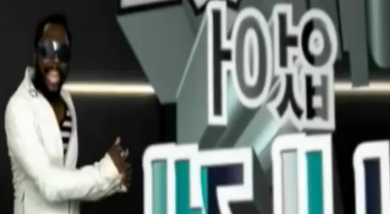 Update: Thanks to our reader Connie, we have the official video – looks like the YouTube version I screencapped from had the words flipped because it was bootlegged. Our […]