The K-pop genre tends to bring to mind thoughts of neon hair, wide-eyed girls with flawless, pearlescent skin, barely legal boy groups executing perfectly synchronized dance routines whilst holding the shards of their broken hearts. Not to mention those earworm hooks that you belt shamelessly on the drive to work, whether you know Korean or not. Yet many also recognize the dark underbelly of the industry, where plastic surgery, eating disorders and corporate control thrive, not to mention the occasional suicide.

With the release of her second EP, “X,” singer/ songwriter/rapper Amber Liu appears to break past the very barriers that molded her, opting instead to carve a new path for herself in the American music scene. Born in Los Angeles, the now-27-year-old Liu moved to South Korea back in 2008 to become an SM Entertainment trainee, eventually debuting a year and a half later in the five-member girl group f(x). In 2015, Liu began releasing solo content with her first EP, “Beautiful.” Since then, she’s left SM, signed exclusively with Steel Wool Entertainment, moved back to L.A., broken up with her boyfriend and seen the death of her former bandmate, Sulli, who tragically committed suicide last October. Though “X” possesses the usual feel-good vibes of a typical electro-pop album, a river of passion flows beneath, conveying themes of breaking out, starting over and leaving the past behind.

The first song, “Hands Behind My Back,” encapsulates a sense of claustrophobia—the death of authentic expression in the leering face of K-pop’s infamous “slave contracts.” “I’m tested by these fools,” she sings, as the sleek, upbeat interplay of synth and drums bewails the life of servitude all trainees and idols undergo in exchange for stardom. This sense of powerlessness is a motif echoed later in the Kelly Clarkson-esque breakup ballad “Numb,” in which Liu reaches an emotional nadir at the end of a toxic relationship. Plaintive piano chords mingle with the melancholy sighs of a cello, and Liu’s powerful mixed voice delivers all the pathos of a lost lover’s tears.

Not only does the aptly named “X” mark a departure from Liu’s old life with f(x), it also signifies her newfound relationship status. The song “Other People” is an upbeat declaration of independence: in it, the tears have dried and Liu seeks to replace her ex by drinking, avoiding their old haunts and sleeping in different beds at night. Ultimately, she discovers the key to rebirth lies in replacing said ex with people who create a more positive impact on her emotions. “Curiosity” is an unabashedly ‘80s-inspired get-up-and-moonwalk bubblegum-pop track that captures the sizzling alchemy of mystery and fascination that exists between two potential paramours. With its snappy, syncopated claps and Debbie Gibson “Electric Youth”-era vibe, the song is probably the catchiest one on the EP. “Ready for the Ride,” on the other hand, is the musical personification of being bathed in a wave of cool night air as you coast, windows down, through the gleaming labyrinth of L.A.’s downtown streets. A throwback to ‘90s/ early 2000s R&B jams, it opens to the twinkle of wind chimes and a rainmaker, heralding an invitation to take a blossoming romance one step further.

“Stay Calm,” the final track on the EP, concludes the journey “X” takes us on, from psychical constriction to a spiritual reconnection with the self. “I’m gonna be who I should have been a long time ago,” Liu sings, to the rhythmic pulse of an electric guitar and trancelike, stacked vocals. “Break from the shame/ Release my soul and let it fly away.” The song is a clear indication of Liu’s newfound sense of strength in the face of media scrutiny. The fervent chant, “I’ll get ready for my life,” at the song’s halfway point captures the core of what “X” represents: K-pop industry and ex-boyfriend be damned, Liu’s following her gut instincts now. And for that reason, her star will burn all the brighter.

At the 2019 Unforgettable Gala, Liu put on a lively set that included her first live performance of “Curiosity.” Watch the full performance here. 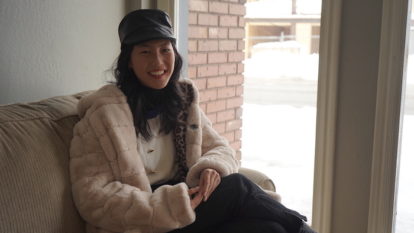 In Park City, Utah, the weather is chilly and gray, but actress Shirley Chen wears a warm grin—and several layers of coats. The morning after her silver-screen debut at […]