Author Jesse Q. Sutanto has returned with “Four Aunties and a Wedding,” a perfect sequel to her outrageously funny IndieBound bestseller “Dial A for Aunties.” Sutanto hasn’t sacrificed an ounce of wit, cultural nuance or matrimonial festivity, and attempted murder is still very much in the question.

Since her 2021 debut, Sutanto has garnered critical and popular acclaim (maybe not a surprise for the Oxford University master’s graduate), winning the Comedy Women in Print prize and landing a Netflix deal for “Dial A for Aunties.” Publishing today, March 29, “Four Aunties and a Wedding” marks her fifth published novel.

The rom-com chronicles the mishaps of Chinese-Indonesian protagonist Meddilin “Meddy” Chan and her decidedly English wedding. Ultimately, the wedding-planning Chan women have met their match in the form of Meddy’s own (potential mafia) wedding planners, Staphanie Tanuwijaya and her somewhat menacing uncles. If this already sounds like a lot that’s because it is, but Sutanto’s dry humor and tight focus on the rift between Chinese-Indo and English culture anchor the narrative so we don’t get lost along the way.

The book is written in first-person; for those who read its predecessor, we return to the mind of the perceptive but at times overly cautious Meddy, who both loves and is exasperated by her family. Sutanto’s command over colloquialisms and pop culture enable the reader to slip comfortably into Meddy’s psyche. Even with the looming fear of murder on the horizon, we can still grasp what it means when Meddy’s Big Aunt and Second Aunt “nod with thin-lipped smiles like they’re Taylor Swift losing a Grammy to Adele.”

Sutanto’s writing shines in sections like this. She takes universal concepts, like a wedding, sibling relationships and in-law trouble, and uses them to depict touchstones of Chinese-Indo culture that are most likely new to the average reader (and happily familiar to others). Heighten the stakes with a mafia-esque twist, and instead of balking at the komodo dragon fascinators worn by Meddy’s wedding party or her family’s insistence to speak in butchered British slang, the reader’s focus shifts entirely and effortlessly to the potential premeditated murder at the heart of the story.

The novel’s chronological setup aids in this as well. “Four Aunties” is structured in three acts: the planning of the wedding, the actual wedding and the aftermath of the celebration. In the weeks leading up to Meddy’s big day, Sutanto dedicates most of her pages to developing the relationships between Meddy, her aunts and her mother, before they even know there’s a murder threat on the horizon. She deftly slips in humorous anecdotes about the family members, sharpening our understanding of different characters without bogging the reader down in unnecessary details. At some points it can feel monotonous to read through the descriptions of each family member and their quirks, but the diversions from the main plot in the beginning of the book help soften the absurdity of the mafia-wedding-murder climax, offering readers some much-needed realism through these fleshed-out characters.

It wouldn’t be egregious to say Sutanto doesn’t allocate quite as much time to the development of the Tanuwijaya wedding-planner clan, or even Meddy and Nathan’s love story (a romance that ironically feels shoehorned in, even if the novel is about their wedding). She characterizes the former largely by emphasizing their similarities to Meddy and the Chan women, which means we don’t see the same measure of quirky details that allow us to understand who these individuals really are—we just get the Chan Clan Part Two. In regards to the romance, Meddy describes Nathan and his charming qualities a couple of lines per chapter, but he’s generally left out of the loop in terms of the mafia-murder plotline, as Meddy doesn’t want to endanger her fiancé by telling him. Because a great deal of illuminating character development happens while Meddy and her family discuss how to deal with the threat, Nathan remains relegated to the background and lacks an active voice in the story. Sutanto does devote a few pages to the couple at the end of the novel, but they read as an attempt to make up for lost time. Even so, the other forms of love—cultural, ancestral and familial—that are imbued within the pages of the book make this romp of a read well worth it.

“Four Aunties and a Wedding” marks another marvelous addition to Sutanto’s growing collection of character-driven rom-coms. As her career flourishes, she continues to tackle themes of cross-cultural relationships and familial love unflinchingly, but with playfulness. Sutanto has a knack for creating twisty narratives that can’t necessarily be defined as logically sound, but her dedication to memorable, layered characters allows readers to suspend disbelief for each novel’s duration. Focusing more on familial ties than any other subjects, “Four Aunties and a Wedding” is crafted so we can take the chaos in stride, laugh along with the characters and learn to appreciate even the most maddening parts of the people who will never, ever, under any circumstance, leave us alone. 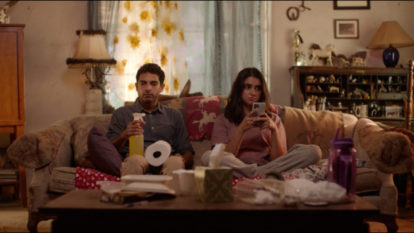 Sethi’s directorial debut “7 Days” follows Rita and Ravi as they shelter in place together after a pre-arranged first date.