Who needs a haunted house for creepy-crawlies when you’ve got an internment camp? The second season of AMC’s prestige drama “The Terror” takes us back to one of the darker periods in American history. The sum-total horror of being rounded up on the basis of your race, enduring visitations from Japanese spirits (and we don’t mean getting lit on Suntory) and coping with dirty, uninhabitable living quarters make for plenty of thrills, chills and jump-scares.

Set during World War II, “The Terror: Infamy” follows American-born Chester Nakayama, a kind of Fred Korematsu-like character, who struggles to make sense of mysterious killings menacing the Japanese Americans being interned. Actor Derek Mio is convincing as Nakayama, balancing his redblooded American personality and expectations with his immigrant family’s beliefs in Japanese mythology and the supernatural. To complicate things further, he’s embroiled in a relationship with the gorgeous and pregnant Luz (Cristina Rodlo), whose “Mexican” accent sounds like a combination of Ukrainian and Australian, and who willingly enters the internment camp in order to stay by Nakayama’s side.

He is also separated from his father, a stoic and resilient fisherman (an outstanding performance by a wonderfully grumpy Shingo Usami) who is being detained in the freezing cold environs of South Dakota, ice fishing for survival. As Nakayama and his family try to make their horse stalls as homey as possible, various members of their community are being possessed by evil demons that force them to commit suicide or are killed by the American soldiers guarding them, with many appalling gross-out moments sure to please even the most diehard horror fans.

A gloomy gray pall haunts the entire art direction of “The Terror: Infamy,” from the dryer lint-like fog blanketing Terminal Island (shouldn’t the California coastal island off San Pedro be a bit sunnier in real life?) to the prison camp in Colinas de Oro, Oregon. The costume and set design is period-perfect, from the puffed shoulders on Luz’s cardigan sweater to the shiny, black Packard sedan that plays a crucial role in the Nakayama family drama.

Warm amber light bathes the tea ceremony as Yuko, the beautiful spirit girl, reads Nakayama’s fortune in the tea leaves. A jade green sky stretches across the horizon, creating a bizarre reflection in the frozen lake, with its patches of splintering ice and snow. As with “The Terror”’s first season, these striking moments of cinematography captured on location in Vancouver are more worthy of a cinema-plex than palm-sized phone screens, on which the show will, realistically speaking, probably be viewed.

Overall, “Infamy” is an emotionally taxing watch. When you’re not cringing because of a hairpin going where no hairpin should, you’re outraged as Nakayama and his father battle over dueling notions of masculinity, when in reality no man, woman or child should suffer the indignity of a race-based prison camp. And lastly, depression hits when you realize that these kind of camps should be ancient history, but they’re still alive and well in the migrant detention centers of Texas and California. The real horror is how little we’ve learned in the past 60 years. 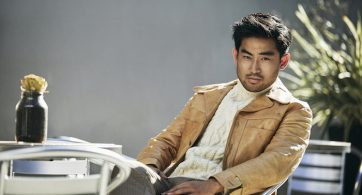 The second season of AMC’s anthology series “The Terror” begins not with a bang, but a squelch. On Terminal Island, just off the coast of Southern California, a woman dressed in […]