In the cluttered back room of an animal hospital, gangsters spray rounds of bullets at Vic (Dave Bautista), a muscle-bound cop who’s been temporarily blinded by recent Lasik surgery. He returns fire as best he can, blowing up cans of dog food and bottles of medications in the process. And in the middle of it all Stu (Kumail Nanjiani) crawls across the floor, screaming at the top of his lungs.

Billed as a buddy-cop movie with a modern twist, “Stuber” isn’t short on shoot-em-up action. Directed by Michael Dowse (“It’s All Gone Pete Tong”), the film follows Stu, a humble Uber driver struggling to maintain his high-star rating and a one-sided relationship with his friend Becca (Betty Gilpin). Vic, meanwhile, is a rough-around-the edges cop whose obsession with a gangster named Teijo (Iko Uwais) is finally about to pay off—if only he could see more than two inches in front of his face. Vic ropes the unsuspecting Stu into ferrying him around Los Angeles, in an epic, adrenaline-pumping ride that tests both men’s patience and navigational skills.

While “Stuber” won’t win any awards for its cinematography, the drive takes audience members  on an entertaining tour down some familiar L.A. neighborhoods. From Long Beach to Compton, and later to a hot sauce factory clearly inspired by Irwindale’s Huy Fong Foods, much of the movie’s slapstick humor is driven (no pun intended) by the very concept of Uber. From confusion about Uber Pool, to the final jaw-dropping price of Vic’s ride (“Surge prices!” Stu crows), the film explores one of the stranger aspects of 21st century life—getting into the car of a stranger that you called from an app, and trusting that you won’t be murdered.

Nanjiani shines as Stu, a near-stereotype of the downtrodden Asian American “nice guy” that’s filled the mainstream. He’s in love with the oblivious Becca (for reasons that aren’t really clear), but refuses to speak his feelings and instead allows her to use him for everything from financial stability to casual sex when she’s feeling down. But Stu has a wicked streak of dark, sarcastic humor, deadpanning “The health grade is a B, which I’m pretty sure stands for Hepatitis B,” when Vic insists that he head into a seedy strip club. Bautista’s hard nosed and muscular Vic provides a nice contrast to Stu’s character, but there’s no denying that Nanjiani does most of the heavy comedic lifting in “Stuber” as a normal guy who just wants to get his leased, electric Nissan home in one piece (spoiler alert—he does not succeed).

Aside from the straightforward, rather predictable plot of good guys vs. bad guys, there’s a surprisingly deeper conflict at play in “Stuber:” what does it mean to be a man? Stu is, in many ways, the idea of a proper 21st century American dude—he’s not afraid to cry or hug it out. He insists on political correctness, and uses his brain instead of brawn. Needless to say, Vic, a macho man-of-few-words, has some problems with this. As they squabble and even come to blows with one another, it’s refreshing (if a bit eyebrow-raising) to see an action film try to tackle the concept of toxic masculinity.

But that’s not to say that it’s a serious movie by any stretch of the imagination. Philosophical ponderings aside, it’s like any fun, but predictable action flick, peppered with plenty of gunfights and well-timed one-liners from Stu. “Stuber” won’t leave you wondering about its larger cultural significance, but you might wonder whether you should take up ridesharing for a living, too. 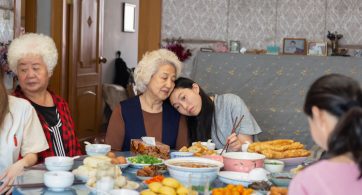 There’s an old Chinese idiom that says that there are four “flavors” of life: suan (sourness), tian (sweetness), ku (bitterness) and la (spiciness). It’s the basis behind many Chinese […]