A wildly colored food truck with a pair of longhorns strapped to its front careens down a hilly, winding road in beautiful stop motion-esque glory. Suddenly, “El Jefe” hits a bump in the road. And inside this psychedelic playful chaos, a rainbow of colorful ingredients from a mouthwatering dish are thrown into the air in a glorious, delectable fashion.

A word of warning— “The Chef Show” is not for those looking for the high energy razzle-dazzle of programs like “Top Chef” and “Hell’s Kitchen.” There are no gratuitous close ups, no dramatic shots of sizzling hot dishes and no angry men shouting about seconds ticking away on a timer. It’s just Roy Choi and his buddy Jon Favreau, hanging out with some chef friends making, baking and sampling some delicious dishes. This is a show made for the crowd whose idea of a grand old time is an evening spent kicking up their feet on a porch with a brewski (yeah, they would probably call a beer a brewski) and a gaggle of best buds. The show’s slow pace is just part of its charm. Sit back and let the second volume of this Netflix original (coming to a screen near you on Sept. 13) happen.

Of course, a major pull of the series is the personality behind it—Kogi BBQ Taco Truck founder and celebrity chef, Choi. At times, his unaffected nature could be interpreted as arrogance, e.g. his seemingly frivolous checklist of what makes good fried chicken (it seems like the man has never known the simple pleasure of eating deep fried chicken at some greasy spoon truck stop), but, while making salsa, the team realizes that they do not have cilantro on hand. It’s no sweat off of his brow. Choi improvises on the spot and substitutes basil. Real connoisseurs of Mexican cuisine might recoil at his salsa recipe (uh, is he seriously adding apple cider vinegar to that blender?), but it soon becomes obvious that Choi is not about committing to any sort of traditional culinary code of honor. He’s a master of chopping and screwing tried and true recipes. Maybe it’s a result of Choi’s upbringing in the famously diverse city of L.A., but everything that has touched his international palate is up to be remixed.

The show kicks off with Favreau and Choi making a series of chicken dishes in true Hollywood style, with none other than Seth Rogen. The three dudes hanging out and enjoying some yardbird makes for some seriously funny banter, especially over Rogen’s fear of raw chicken. From then on, the series divides its time between Los Angeles and the Bay Area. The L.A. episodes focus on the city’s hopping cultural hotspots, like chef Daniele Uditi’s Pizzanna and Wes Avila’s Guerrilla Tacos. The L.A.-based culinary masters on “The Chef Show” seem hellbent on reimagining their native cuisines—think crudo uni fish tostadas and neo-margherita pizza. The Bay Area chefs, on the other hand, are less about flexing and more about showing off the freshness of their ingredients. It’s an interesting dichotomy that perhaps best exemplifies Choi’s own cooking ego: Finding a balance between elevating a cuisine and staying true to its roots.

That philosophy of the show is best exemplified in its second to last episode, Skywalker Ranch. There, the pair cook up a storm of delectable dishes like oyster omelettes and peach compote for the firefighters and kitchen staff of the ranch while chatting about the latest of what’s happening in the “Star Wars” universe. It clearly displays what Choi and Favreau are seeking to do with their series: To show that despite all the bells, whistles and frou frou of the celebrity chef game, any dish is best served shared. 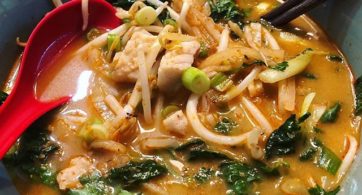 Nothing is more welcomed after a night of heavy drinking than a fool-proof hangover cure. While it’s Aspirin and Sprite for some or a cold beer down the gullet […]