When I first tried to find work in TV, I scored a meeting with a studio president and explained that I wanted to be a TV writer. He looked surprised, like a dog had gotten up on its hind legs and fixed itself a cup of coffee. “Most TV writers are very smart,” he said paternalistically. “I’m very smart,” I responded brightly. “Yeah, but most TV writers have gone to Harvard.” That’s when I understood that becoming a TV writer might be out of reach for the likes of me.

That’s why I was stunned by the Nisha Ganatra-directed comedy “Late Night” and what it has to say about white privilege, token hires and female friendships. Though it’s funny and light, “Late Night” is not a rom-com. It’s more of a buddy film between two intelligent women. A young Indian American woman, who did not go to Harvard, dared the impossible: to become a TV writer. Mindy Kaling is Molly Patel, a chemical plant worker who wins an essay contest and scores a meeting with the jaded showrunner of a late-night talk show. Patel is a huge fan of the show’s venerable host, the sharp-tongued Katherine Newbury (Emma Thompson), whose monologues have grown stale and irrelevant over the years. On her first day, Patel naively charges in with breakfast pastries and an earnestness that shakes up the homogenous boys’ club that is the show’s writers room, staffed with mostly cis white men educated—surprise!—in the Ivy League.

The movie’s costume designer, Mitchell Travers, helps develop the two characters through the language of fashion. Middle-brow and plump Patel shows up her first day of work in a navy blue shirt dress with white piping that seems to say: “How may I be of service?”—like a secretary from the early ’90s. Meanwhile, Newbury’s succession of sumptuous designer suits seem to say: “You are not worthy of sharing my oxygen.” As their friendship evolves, the fashion does, too. Kaling dons the casual jeans of confidence, while Thompson rocks the somber blazer of remorse.

As the first woman and person of color to write for the now legendary sitcom “The Office,” Kaling brings authenticity to the writing of her scenes. Although Patel becomes increasingly important to the writing team with her fresh and snappy innovations, like the “White Savior” segment in which Newbury hits the streets of New York to use her white privilege to save people of color from their everyday problems, the other writers grow resentful. One growls at her about how deserving white men lose their seat at the table because of diversity hires like her. She bravely retorts that she was hired because of her talent, not because of her token status. But the truth is, she does get the job because she happened to be at the right place at the right time when Newbury was looking to bring a woman into the writers room.

The movie wrestles with the need and consequences of such diversity hires. Sure, the door can and will open to give us “Others” a shot. The question is, does the writer have the self-belief and the character to thrive once that door opens, especially in a toxic workplace, where family life is not honored, women bully each other and the male ego is so very fragile? Fortunately for us, Kaling and Ganatra did and do. Now I realize that when the studio executive tried to discourage me by mentioning Harvard, it was a dog whistle for a certain kind of prep school privilege. Like Molly, I could have persevered. I could have worn the blazer of entitlement. 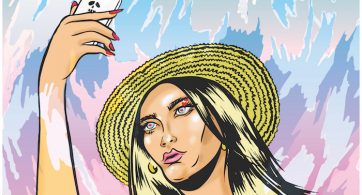 Editor’s note: In each issue, we scour the creative world of Asian American wordsmiths to bring a compelling screenplay to you, our dear reader. This month, we bring to […]