Editor’s note: In each issue, we scour the creative world of Asian American wordsmiths to bring a compelling screenplay to you, our dear reader. This month, we bring to you the chillingly fun “DiE Phone,” by one of our writers, Patrick Green.

Patrick Green is an L.A.-based filmmaker and journalist of mixed Vietnamese-Italian-Irish heritage. After experiencing much frustration within the Hollywood meat grinder, he decided to take control of his career and began making his own projects. In the past two years, he has written and directed three short films, a digital comedy skit series and branded-content pieces for the ID Agency.

His directorial debut, “TAG,” premiered at the 35th Annual CAAMFest 2017, played at over two dozen film festivals around the world, and is now streaming on Amazon Prime. His latest project is “For Your Consideration,” a 20-minute documentary on the “Harvey Weinstein Casting Couch” statue that shook up the 2018 Oscars’ ceremony. He also is set to release a horror-thriller short, “Mommy’s Little Monster,” inspired by his childhood.

He has a master’s in film/TV screenwriting from Cal State Northridge and a Bachelor of Arts in journalism from San Diego State. He’s also a freelance writer/editor who has been published in over 50 digital and print publications, including “Los Angeles Magazine,” “E! Online,” “LA Taco” and “XXL.” He has authored two travel guides and is currently the entertainment editor at Mandatory, a website for dudes.

An aspiring social media influencer and her doting “photographer” boyfriend’s magical getaway to Joshua Tree National Park is thrown for a loop when they find a cursed cellphone that offers “Insta-fame” at your fingertips, but turns its users into demonic versions of themselves.

Christine, 25. Plain, pretty hapa. She’s half this, a quarter of that, but Christine has never felt whole, which has created a hole in her personality. She’s an outwardly confident, inwardly insecure girl who feels a constant need to be “liked” by strangers. Instagram has allowed the racially ambiguous girl who always felt invisible to be seen by the outside world, but it still isn’t enough. She dreams of a bigger platform and hopes that her DIY spirit can take her to the next level—if only she had the exposure.

Benjamin, aka Benji, 27. A socially awkward startup exec who felt disconnected with the real world until he hooked up with Christine. Her flirty emoji games and thirst for adventure pulled him out of his shell. For a high-achiever who always felt pressure to perform and prove himself, her carefree spirit was a breath of fresh air. She rebranded her loyal and obedient boyfriend “Benji,” and gave him a makeover in real-life and online. Although he tires of her need to document their daily life, he loves taking photos that show her in the perfect light because, to him, she is pure joy.

Wei, 26. Raised in a poor village outside of Zhengzhou, China, Wei moved to “Phone City” with her husband when she was 18 to find a job at a tech company’s factory. Most of her adult life has been shaped by an American company that manufactures products she will never own. Her soulless job was slowly killing her, but the ultimate death knell sounded when her husband ran off with their savings. With nothing to live for, Wei discovers something to die for.

Brie, 26. Her IG bio reads: “California Girl + Globe Trotter.” Content is Brie’s currency, and business is good. She’s risen from the depths of Tumblr to become a top-shelf brand ambassador. She’s the shining social media star that Christine follows until their timelines are turned by the DiE Phone.

Made in China, the Phone X is the latest technological innovation forged inside a 21st-century sweatshop. This all-you-can-do device may cost you a paycheck, but the Chinese factory worker (Wei) who made it paid the ultimate price, and now she wants payback. Wei’s vengeful spirit lives on in a cursed cellphone (DiE Phone) that’s hardwired for something far more sinister than taking selfies.

The unholy cellphone falls into the hands of a vacationing couple who use it to take stunning pictures that go viral, giving an insecure girl (Christine) the Insta-fame that she’s always craved. Her boyfriend (Benji) is happy for her newfound confidence, but their desert getaway was intended to help them unplug, and Christine seems to be “possessed” by her new possession. Nature hikes come to a halt for photo ops, meditative bliss is broken by notification alerts and a rival “influencer couple” show up to hijack her timeline.

The villainous smartphone has an evil mind of its own, using distorted filters, spying technology and a seductive voice to corrupt Christine. Benji soon notices that something is off. He does some Google investigating, uncovers the awful truth about some tech factory suicides and finds out that the phone once belonged to a missing hiker who was led into the desert to die by its “hacked” GPS.

Benji tells Christine about the phone’s dark past, but she’s blinded by its bright glow and accuses him of being scared that he’s losing her. She’s right. Her social media feed is growing—like a cancer, eating away at her identity. The sweet, free spirit is turning into a soulless creature. Benji realizes that the only way to save her is to destroy the DiE Phone, but how do you kill something that isn’t alive?

“DiE Phone” is an homage to B-horror movies that offer social commentary. John Carpenter’s “Christine” is one of my favorite genre films that used the symbolism of a “killer” car to represent our hopes, dreams, desires and identities. The modern equivalent of a “killer car” is a cellphone. Where we once needed a car to get away from our present, we now use a phone to take us away to anywhere but here.

A cellphone is only a tool (or in this case a weapon) that I use to tell a “Black Mirror”-esque parable about the transformative and highly destructive power of social media. We assumed that apps like Instagram were designed as a way to show others the world through our eyes, but every time we open them, we’re reminded of who we aren’t. Social media is an easy target, but I enjoy situating the demonic within the mundane, and “DiE Phone” is catchy AF.

As an indie filmmaker I have to think big, execute small. Whatever I write, I have to be able to shoot with a small budget, skeleton crew, etc. I envisioned Joshua Tree as the perfect setting to tell a contained story like this. The mystical open space, with its dramatic landscapes, epic sunsets and bizarre, Dr. Seuss-like trees is ideal for letting your imagination run free, snapping a selfie or making a supernatural horror movie.

The consumer culture themes within this story aren’t profound, but they’re relatable. Who hasn’t engaged in sociopathic behavior “for the ‘Gram?” “DiE Phone” will be worth making if it helps you remember that “sometimes you will not know the value of a moment until it becomes a memory.” Words to live by … and I saw it on someone’s Instagram bio. 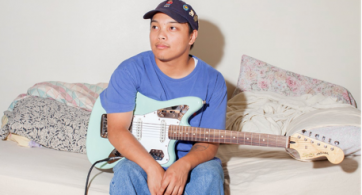