Enter Yoko Ogawa. She’s a renowned author who has published over 40 works and has been awarded every major Japanese literary award in existence. Her latest novel to reach the West is an Orwellian tale focusing on a nameless narrator living on a bucolic, but mysterious, island governed by a secretive militant task force known only as the Memory Police. Once the Memory Police deem something to be “dangerous,” which can be something as innocuous as perfume or even birds, it vanishes completely from the island and the population’s memory. Originally published in 1994, “The Memory Police” is finally getting an English-language treatment 25 years later by prolific translator and Japanese scholar Stephen Snyder.

“The Memory Police” begins like a nightmarish fairy tale with the narrator recalling her mother telling her of all the “Fragrant, bright … and wonderful things” that existed long before the Memory Police came to power. Things the narrator “can’t possibly imagine.” Her mother is one of the few people on the island whose brain, for reasons that are never quite explained, remains unaffected by the Memory Police’s tactics. Frustratingly, not much in the novel is ever explained. The reader is left wading through a story with many holes, trying to piece together a full narrative with what little details there are of the island. But the holes aren’t the result of poor storytelling; it’s just that many of the narrator’s memories have been erased.

The novel unfolds from a first-person point of view, through the words of our dear narrator. She’s a writer—considered a lowly job on the island. Even though her words make up the bulk of the book, her voice seems to take up little space with her diminutive, timid personality. She’s a lonely character, whose only friends are an elderly male neighbor and her editor, who also has the same “dangerous” condition as her mother. Even when the narrator offers to spirit her editor away under the floorboards of her home to hide him from the Memory Police, she’s too afraid to tell him how she really feels about him. Her sexual frustration instead bleeds into her salacious novel, fragments of which are sprinkled throughout the “The Memory Police.” The novel-within-a-novel structure gives readers valuable insight into a narrator whose very mind is governed by state surveillance. The only place that she has to be free is on the page.

Despite the oppressive regime that the three live under, they find small ways to rebel. They eat forbidden candies, try to remember the scent of perfume and even throw a small birthday party for the neighbor. But one day, he suddenly dies. After his death, the novel progresses in a blur. Instead of focusing on the Memory Police or her love affair with her editor, banal tasks of the narrator’s day are relayed, and she seems completely resigned to her fate. This period after death could have dragged on forever, stuck in a limbo. But, the novel ends rather abruptly. One day, after the Memory Police decide that bodies should be illegal, our beloved narrator simply fades out of existence, with only her voice left echoing away on the emptiness of the island.

The thing about “The Memory Police” is that readers might find themselves at the end of the novel thinking, “Well, that didn’t really go anywhere.” It is a haunting tale of loss, but at its heart the novel is also a horror story. It’s a complex exploration into the smothering weight of grief. What happens when one is called to rebel, but simply doesn’t have the inner strength to? It harkens back to another puzzling work with an ambiguous ending—the original ABC series “Twin Peaks,” and Major Garland Briggs’ greatest fear: The possibility that love is not enough. 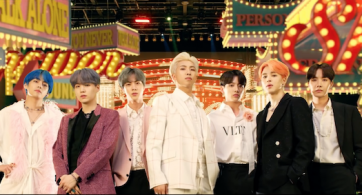 Attention all ARMY: This is not a drill. BTS will finally take their first break since their 2013 debut. The mega-popular K-pop boy band issued an official statement on […]