As the bar lights dim and the stage lights brighten, a young woman holding a shiny, new guitar emerges from behind the stage curtains. Dressed in country gear from her collared, bolo-bearing dress shirt down to her cowboy boots, she takes her place in front of the mic and slowly raises her sun-browned face beneath the lights in an Austin dancehall. Her aunt holds up a tablet so that her mother can tearfully watch from the Philippines.

This year, the Los Angeles Pacific Film Festival chose “Yellow Rose,” a film written and created by debut feature director Diane Paragas, as its opening night selection. The first Filipino-directed movie to kick off the festival follows the story of an undocumented 17-year-old Filipina, Rose Garcia, whose world is turned upside down when her mother is arrested and deported by Immigration and Customs Enforcement. Garcia must choose between living with her mother in Manila or to stay in Texas to pursue her dreams of becoming a country music singer.

The smoky beauty of Texas is a central feature of “Yellow Rose.” Paragas showcases recognizable Austin landmarks like the Broken Spoke Dancehall, the festivities of chicken sh-t bingo and the beauty of sleepy small towns. Despite her years in New York City, it’s obvious that Paragas still has a soft spot for the Lone Star State. The film’s dreamy atmosphere provides the perfect medium to discuss its core themes. Although “Yellow Rose” does have its comedic moments, its reality is harsh. Garcia’s mom was deported and she was left by herself—and she might be facing the same fate as her mother.

“Yellow Rose” features notable Filipina actresses like Lea Salonga (“Mulan”), Eva Noblezada (“Miss Saigon”) and Princess Punzalan (“The Story of Us”). Although she’s better known for her Broadway performances, Noblezeda wonderfully portrays the complexities of a day-dreaming, teenage girl facing issues that would be difficult for even an adult to figure out. Salonga, an esteemed actress within the Filipino community, emerged from a 24-year long retirement from the silver screen just to be in Paragas’ film. Her convincing performance as the dislikeable Gail will likely set teeth on edge. Priscilla Garcia (Punazalan), aka Rose’s mom, walks a fine line between heartwarming and heartbreaking. In between lectures on the dangers of hanging out with boys alone, viewers will catch her gazing lovingly at her daughter. There’s a genuine, motherly love that shines between Rose and Priscilla.

Perhaps one of the most delightful surprises of the film is Liam Booth’s performance as Elliot Blatnik, Rose’s love interest. Booth portrays puppy love with just the right amount of sweetness and awkwardness. And, his blatant whiteness, i.e. when he’s forced to promise Rose’s very Catholic mother that he’ll be taking Rose to church (in reality they’re driving to Austin for a concert) in order to hang out with her, provides welcome comic relief in some of the film’s more tense moments. Despite the fact that Rose ghosts him for a few weeks, when life gets to be too much for her, Blatnik immediately forgives her with no hesitation—he just loves Rose to death. He’s serves as a gentle, loving rock in her tumultuous life and symbolizes the possibility that there is indeed, a bright future for her in Texas.

It took Paragas 15 years to make  “Yellow Rose,” a sweet film that deals with real world issues in an entertaining format and feels perfectly tailored to our times. Its ending leaves many questions unanswered—an apt artistic choice since so many who are in the ICE system await their fates in an uneasy limbo. And yet, filmgoers can leave with a sense of hope—and the feeling that there is a place in American culture, even in country music, for all of us. 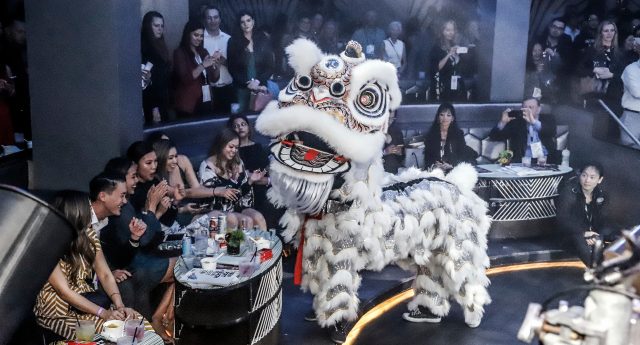 After watching the spotlight films at the Newport Beach Film Festival’s Pacific Rim Showcase, viewers moved downstairs to Time Nightclub, where two dragons, one hot pink and one white, […]