To describe ZHU’s latest project, “Ringos Desert,” simply as his sophomore album would be a colossal understatement. Rather, it’s a sequential rollercoaster that explores both the emotional turmoil of a doomed romance and the physical demands of traveling through a desert. “Ringos Desert” underwent an unusual release — as the second act to a well-received EP of the same name dropped in April, this September release faced substantial pressure to maintain the established theme, as well as to continue the saga of its predecessor’s cliffhanger.

Glossy and ultra-polished production transforms the Weeknd-esque, falsetto singing that is featured on many of the tracks into yet another instrument on ZHU’s palette. While these vocals are delivered and mixed well, a little variation from ZHU could have been interesting. Ultimately, it’s a non-issue, as variation comes in the form of a plethora of collaborators who lend their vocals for ZHU to play with, including Karnaval Blues’ husky vocals on “Still Want U,” and again on “Love That Hurts.”

The later half of the album arguably trades thematic consistency for creative freedom, with a clear distinction sonically between the first and second halves of the album, which some listeners will undoubtedly find disappointing. Within the first seven tracks you hear spaghetti western guitars and atmospheric samples of rattlesnakes and screeching crows peppered throughout, but the latter half of the album lacks the same commitment to the desert theme. Sultry saxophone riffs and electric guitar motifs evoke the big city more than wide open spaces.

Several track titles feel out of place in the barren environment “Ringo” traverses, namely “Drowning” and “Waters of Monaco,” both creative high points within the album yet jarring within the theme. Perhaps the biggest offender is “Light It Up,” an insatiably catchy downtempo banger that is completely incongruous to the rest of the album. While a lack of theme can often be overlooked, everything from the album art to the release at the Burning Man festival screams “desert,” and listeners may be underwhelmed by the influence it’s had on the second half of the album.

Despite certain nitpicks of “Ringos Desert,” ZHU exists comfortably in the tiny minority of artists who possess the raw technical talent, creative vision and an appetite for theatrics to pull off a record this large; you’d be hard pressed to find another creator willing to transport two-and-a-half tons of sand to each show, for example. “Ringos Desert” is a sonically bold and nuanced project from one of deep house’s freshest producers, although it is ultimately held back by a faltering commitment to an ambitious theme. 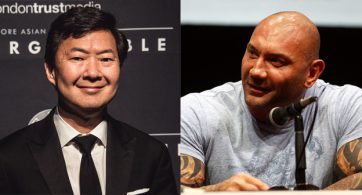 Resident funnyman Ken Jeong is heading back to the big screen. The actor is confirmed to star in the action-comedy “My Spy” alongside “Guardians of the Galaxy” star Dave […]