Why can’t everyone stop talking about Disney’s Oscar-winning animated film, Big Hero 6? Well, during a time when the Academy Awards are heavily critiqued for a lack of diversity, it’s movies like Big Hero 6 and shows like Fresh Off the Boat that allow Asian American audiences to see characters who actually look like us (and aren’t villainized or in the background).

We spoke to Ryan Potter, the voice of Hiro Hamada, back in December during KoreAm & Audrey‘s annual awards ceremony, Unforgettable. After joking around about Asians knowing the best places to eat, he pointed out that what really makes our community so special is that we always support one another.

“There’s really no competition with one another for roles,” Potter explained. “If one of us is suited for a certain role better than another, it’s kind of like ‘Hey, I’m just happy one of us got it and the role wasn’t changed to another ethnicity.’ We all have each others back.”

This support within the Asian American community was certainly evident with everyone’s positive reaction to Big Hero 6‘s Oscar win. In our more recent interview with Ryan Potter, he recalls the very moment he realized that Hiro is one of the first multi-ethnic Disney characters, and what that could mean for the future of films.

“I remember someone told me, ‘How does it feel to be one of the first multi-cultural, multi-ethnic Disney characters ever?’ I was like, ‘Well there’s Mulan– oh wait, no. Pocahontas– wait no.’ Tadashi and Hiro are really the first multi-cultural Disney characters ever,” Potter says. “It’s the 54th title. From here on out, I can only imagine what Disney’s gonna come up with. [Big Hero 6] was definitely groundbreaking and I’m very honored to be able to be apart of it.”

Check out the rest of the interview below:

We don’t know what’s next for Potter, but we do know we’re rooting for him. And for those of you who are still unconvinced that Big Hero 6 is important to the Asian American community, consider what sort of effect it can have on children. As one of the writers for The Nerds of Color points out:

I, for one, am glad for Big Hero 6 and all its flaws. I’ll hope for a sequel or two that will feature – yes – more complex female characters, more men of color, and dare we hope queer people of color too? My daughter will sit in my lap, as she often demands for films that have any action in them, so she can turn her head into my chest if she feels like it’s too scary. I thank Big Hero 6, for the simple and necessary fact that in those moments, that the only person on the screen who looks like her daddy is not the villain. 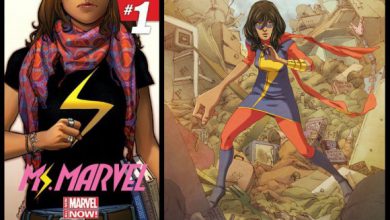 We couldn’t contain our excitement back in 2013 when Marvel introduced 16-year-old Kamala Khan, a Pakistani-American Muslim teenager who is also known as the superhero Ms. Marvel. Khan is […]