Stand-up comic Sherry Cola enjoys exploring just how much she can stretch her acting limits in her emotionally charged role as Alice Kwan on Freeform’s new “Good Trouble.” She plays a genial, soft-spoken, queer Asian American building manager who comes into her own as the first season progresses. Cola’s sublime performance stands out because of how much it contradicts the character that first brought her fame.

She got her big break as Lil’ Tasty, a character she created for the web series “Luber.” Donning her trademark Lakers jersey, baseball cap, pigtails and spunk, Lil’ Tasty riffs and raps about her day-today observations, making her fresh yet relatable.

“I think I went viral because people had never seen an Asian American woman have this much funk before,” she said.

That unexpected success made Cola decide to pursue comedy more seriously and branch out into acting. It’s how she landed on “Good Trouble,” which premiered in January. In addition to the show, she’ll appear in director Drake Doremus’ next film opposite Shailene Woodley and Sebastian Stan, and return for season 3 of TNT’s “Claws” this summer.

“Good Trouble” is a spin-off of “The Fosters.” Cola’s Alice manages the Coterie, a community-style building that Callie and Mariana Adams Foster (Maia Mitchell and Cierra Ramirez) move into. She provides free advice and free toilet paper rolls to the building residents, but there’s more to her— Alice gets her own path-building arc over the season as a lesbian Asian American, still closeted to her mother, who begins to own her identity.

“This felt like such a rare role that, for me, it went from wanting to play Alice to needing to play her pretty fast,” Cola said. “It meant people were interested in her unique point-of-view. She’s really going to make people laugh and cry.”

She remembers not seeing someone this personable on-screen growing up. “There are so few Asian Americans on TV, and even fewer are members of the LGBTQ community. I understand the responsibility I have now.”

The first episode of “Good Trouble” was directed by Jon M. Chu, of “Crazy Rich Asians.”

“I found out he was going to direct it a little while after I was cast. By that point, it just felt like the show’s creators were reading from my diary,” she said. “He was so great and really took the time to understand the cast dynamics and brought out the best in us.”

The experience was also surreal for her because it was indicative of the rise of appreciation for Asian creatives in the industry. “All of us in the community are really ‘yas-kweening’ each other right now over our successes, and Jon is really a leader in that regard.”

The show has helped Cola push her limits as an actor. Alice isn’t just the token funny Asian.

“I’m loving this challenge and finding out what I can do as an actress and exploring my dramatic side,” she said, “because comedy comes a bit more naturally to me.”

Cola always knew she wanted to make people laugh. But she didn’t know she could do it as a career until she saw Ellen DeGeneres’ 2000 stand-up act “Here and Now.” She remembers watching DeGeneres deliver a funny yet poignant joke. “Ellen continues to be an inspiration for me. It stuns me to see how she still makes such an impact on comedy itself,” Cola said, pointing to DeGeneres’ recent stand-up comeback, “Relatable.”

It’s important for Cola to witness how her own characters have that impact on viewers, especially when she hears from people about how they connected with Lil’ Tasty.

“It’s because they were shocked to see an Asian girl have that much funk,” she said. “Lil’ Tasty has freestyle abilities, she’s just a breath of fresh air. She does not possess the stereotypes we are trying to break free from.”

She’s hoping Alice will be equally inspiring for viewers. “If there’s an 11-year-old with traditional parents—Asian or not—watching the show, and can relate to or get inspired by Alice’s story, that would just mean the world.” 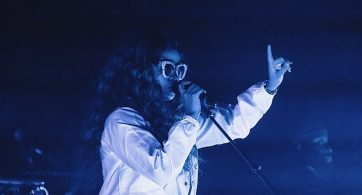 As a Filipino American, I can attest to the overwhelming excitement our community feels when we see a fellow Filipino being celebrated in mainstream media. Anyone will be hard […]