Hollywood isn’t quite ready to end its relationship with Asian American writers of love letters. This time around Leah Lewis (“Nancy Drew”) will play the Cyrano de Bergerac-esque star in “The Half of It” on Netflix. The brains behind this project is Alice Wu, who cut her teeth as a CAPE screenwriting fellow way back in the day and who also wrote and directed “Saving Face” (2004). We can’t wait to see Lewis portray Ellie Chu, a nerdy Asian girl whom a jock commissions to write love letters. The twist? Ellie is in love with the jock’s crush, too—not the jock. Speaking of “Nancy Drew,” there are a lot of Asian Americans working on the CW teen mystery series, including director Larry Teng and executive producer/showrunner Melinda Hsu Taylor.

We hope British Malaysian heartthrob Henry Golding doesn’t get typecast as Mr. Too-Good-to-Be-True, but yet again he seems to be playing the ideal boyfriend in “Last Christmas” with Emilia Clarke. With Paul Feig at the helm, there’s bound to be an interesting twist for the mother of dragons and the dragon lady’s son in this British rom-com, due just in time for the holidays.

Has it already been nearly a year since 12 boys and their assistant soccer coach were stranded in a flooded cave in Thailand for 17 days last June? Apparently enough time has passed for a movie deal to be signed. Nattawut “Baz” Poonpiriya (“Bad Genius”) and Jon M. Chu (“Crazy Rich Asians”) have signed on as co-directors, with SK Global Entertainment to produce and Netflix to distribute. This should be a heartwarming film, as long as Scarlett Johansson or Emma Stone don’t end up playing one of the soccer players.

Horror producer James Wan is at it again. With his last project, “The Curse of La Llorona,” still in theaters, he’s already working on another creepy thriller, “Salem’s Lot,” based on the book by Stephen King. Hey, if it ain’t broke, don’t fix it. He’s back with screenwriter Gary Dauberman, whom he worked with on the series of “Conjuring” films. What must have happened in Wan’s childhood in Australia to make him such a successful master of dread?

Congratulations to Kevin Lau for graduating from the writers room and signing a prestigious overall deal with HBO. He has worked on Joss Whedon’s “The Nevers,” as well as the upcoming series “Lovecraft Country.” His HBO Access pilot “F**Ked Up” stars an Asian American protagonist, the character Charlyne Chao, a nerd who tries to lose her virginity on her first day of college. Chao’s unflattering bowl-cut wig looks like it definitely inspired Maya Erskine’s iconic ‘do in “Pen15.”

Who’s craving another yummy TV show? I know we are! Chrissy Teigen and David Chang are teaming up for a new food program tentatively called “Family Style.” Teigen’s production company, which goes by the adorable name of Suit & Thai Productions, inked a two-year deal with Hulu to distribute Teigen-related content. Looks like the Teigen-Chang fusion project will be a part of a new menu of food-centric content coming to a Hulu subscription near you.

In addition to the glad-handing, there was also wrist-slapping in the form of report cards issued by the Asian Pacific American Media Coalition. They examined the 2017-2018 TV season and decided that most of the studios failed, yet again (sigh), in offering inclusive and diverse content that shows Asian Americans in a nuanced and multidimensional way. ABC got what we call an “Asian F”—in other words, they got an unprecedented high score of A-. And big surprise, Fox got a real F. It’s a good thing Fox doesn’t have an Asian mom. 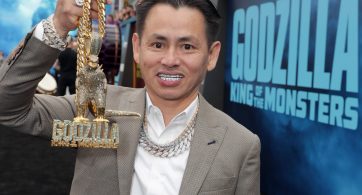 Better known for his fire-breathing abilities, Godzilla is getting an icy upgrade. On Saturday, May 18 Godzilla took over the silver screen for the world premiere of “Godzilla: King […]