Stephanie Hsu is returning to the big screen for another action-packed adventure.

Inspired by the 1980s TV show of the same name, “The Fall Guy” from “Bullet Train” director David Leitch will also center on a Hollywood stuntman, with a few notable differences. Rather than focusing on a stuntman with a bounty-hunter side-hustle as in the original television series, Leitch’s film will follow a burnt-out stuntman (Ryan Gosling) well past his prime. The hackneyed protagonist finds himself back on a film set with a star (Aaron Taylor-Johnson) he doubled for many years before, but this time, the movie star mysteriously goes missing.

Stephanie Hsu will play an assistant to Taylor-Johnson’s movie star. The Taiwanese American actress first made a name for herself as Mei Lin in Amazon’s “The Marvelous Mrs. Maisel,” for which she and the cast won a SAG Award in 2020 for Best Ensemble in a comedy series, and more recently starred as Joy Wang in “Everything Everywhere All at Once.”

Next up for Hsu is a lead role in the upcoming untitled Lionsgate comedy by Malaysian American screenwriter Adele Lim. Hsu will also star in Peacock’s upcoming “Poker Face” anthology series, in addition to Disney+’s “American Born Chinese” live-action show, reuniting once again with the legendary creative force of Michelle Yeoh. 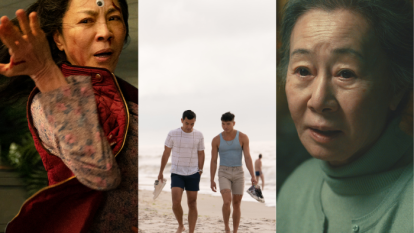 This awards season kicks off with a significant number of AAPI selects that have made their way to the forefront, and we could not be prouder.