As crowds begin to filter into the dimly lit interior of the Avalon Hotel for the Red Bull Dance Your Style Competition, a handful of competitors gather beside the dance floor. For the moment, they stay out of the spotlight as they warm up with quick bursts of locking and popping moves. Taiwanese dancer Locking Young towers over much of the group, but don’t be fooled by his gangly frame—his dance moves are so in sync with the beat, it’s as if he’s memorized every song that plays.

Locking Young, aka Yang Chin, made a name for himself in his home country—a few names, in fact, as he used to compete under the stage names of HighBoy and MonstaLock. A disciple of the well-known Taiwanese dancer Win, Chin took first place at MAX PARTY Locking I and at Gatsby Dance Competition Taiwan. He specializes in locking, a street-dance style that requires dancers to lock into a certain position from a fast motion (think pressing the pause button on a video over and over again, but in front of an audience). It’s Chin’s first time in a Red Bull competition, but he says he’s not too worried. “Red Bull always has very professional dance competitions,” Chin says, leaning back on a sofa. Before the competition, he’s moved upstairs from the dancefloor to talk, but excited cheers can still be heard from the crowd below. “It’s one of my dreams to dance battle in Red Bull. There’s a lot of very dope dancers out here, so I’m excited to battle with them.”

Chin sees competing in Los Angeles as a major victory. In 2018, he moved to L.A. to pursue locking and learn more about the hip-hop culture, but the decision was an uphill battle with his schoolteacher parents. “I was always studying as a child,” Chin says. “Locking saved me from that situation, but with my parents, that was like a war, and a long journey. But if you love dancing, you just keep doing it and keep doing it, no matter what.”

Thankfully, says Chin, his parents have since come around and now support his vision as a dancer. But as he continues to compete against other world-renowned dancers, he’s also moving away from his initial style of locking. “I first did locking because when I started to dance, my friends were all doing locking,” says Chin. “At that time 12 years ago, locking was really popular in Taiwan. So, when I saw them, I just felt that it was so energetic and positive, and I liked that feeling.”

Now, Chin is moving into hip-hop and popping territory. Though it may look similar to the untrained eye, popping is an entirely different ballgame. “After I got here, I started trying to do a lot of different styles, so my style is kind of mixed, locking, popping, hip-hop, freestyle,” Chin says. But had he stayed in Taiwan, where global dance battles are hosted on a regular basis, he might not have ever strayed beyond locking. “In Taiwan, people mostly only practice one style, and just go out and battle in locking battles, popping battles. Here, everybody is more open-minded to appreciating different styles, so the dancers can do everything.”

Chin is embracing that mindset wholeheartedly. He’s also working on a career as a rap artist, and says his first EP will drop in January. He plans to sing in both English and Mandarin Chinese. “I’m trying to do the music that I can really do my style to, like street dance,” Chin says. “I’d also love to bring other dancers to perform with me.”

That’s all in the future, though—for now, Chin bids a cheery goodbye as he returns to the dancefloor to continue his warm-up. Ultimately, after the competition’s sixteen rounds, a hip hop dancer named Zuce takes home the trophy, but Chin is still happy with how he performed. “During the battle I did get a little bit nervous, but I still enjoyed it,” Chin says via email a few days later. “I felt lots of energy from other competitors and audiences, and it was a really good experience for me.” 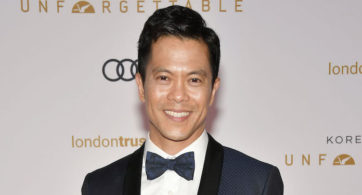 Can’t get enough of the dashing villain from “Wu Assassins?” Then you’re in luck, because Byron Mann  just landed a recurring role on Hulu’s “Little Fires Everywhere.” Mann will […]