Some have dubbed Awkwafina the Queen of 2018, but it’s a title that may well have to be adapted for 2019.

On July 12, the “Crazy Rich Asians” star will make her dramatic debut in “The Farewell” as Billi, a young Chinese American writer hiding her grandma’s cancer diagnosis from…  her grandma. Directed by Lulu Wang, the film explores issues of identity and family through the events of arguably history’s most awkward family reunion.

In preparation for the film’s premiere, we’re looking back at the greatest moments (so far) of the amazing comedian, rapper and actress we stan.

For a self-proclaimed “average” trumpet player, Awkwafina sure is good at tooting her own horn about her lady parts. Although she did get fired after the video went viral, “My Vag”’s success thrust her into the limelight and caught the attention of Seth Rogen, which led to her role in “Neighbors 2: Sorority Rising.” Yo, Awkwafina is a genius!

Peik Lin Goh embodies everything a first-rate wing woman and friend should be, and truly, no one else could have played this hilarious character like Awkwafina. Her sassy comments and one-liners stole the show, which is incredible considering some of the lines that brought the biggest laughs were improvised. Bok bok, b-tch!

For the first time in 18 years, an Asian American woman ascended the stage at 30 Rockefeller to host the show, and who else should have the honor but Awkwafina? Her story about watching the last API female host Lucy Liu literally and figuratively open the doors to “Saturday Night Live” got all of us teary-eyed.

Repping Queens and the hustla lifestyle, Awkwafina stole necklaces and hearts in “Ocean’s 8,” along with an all-star cast including Mindy Kaling, Cate Blanchett, Sandra Bullock, Anne Hathaway and Rihanna. Awkwafina also confirmed that she’s in a group chat with these legends. Imagine casually sending Rihanna a funny reaction GIF.

Not only did Awkwafina get to practice some of her classic humor with comedian John Mulaney at the 91st Academy Awards, she also got to present the award for Best Animated Short Film to Domee Shi for “Bao.”

Acting and doing press for “Ocean’s 8” and “Crazy Rich Asians” must have been a whirlwind of work, but Awkwafina just had to add to her growing list of achievements by dropping an eight-song EP three days after “Ocean’s 8” premiered. If you haven’t listened to it yet, please sit down and treat yourself to 13 minutes of pure comedy and hip-hop gold.

There were many interpretations of “camp” at this year’s Met Gala, but Awkwafina looked like a dazzling orchid in a golden Altuzarra dress paired with some truly glitzy eyeshadow.

We won’t give spoilers but… we promise this movie will make your “Top Awkwafina Moments” list, too. Be sure to head to the theaters with your parents or a friend—and make sure to bring a box of Kleenex with you, too. 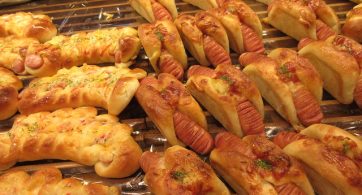 Having to eat the same old generic hotdogs on the Fourth of July can be the wurst. With over 150 million hotdogs being consumed each Independence Day, it’s time […]