Dotted across thousands of locales in the largest state of the continental U.S. is something that transcends the concept of a physical location. It’s an idea, a notion that escapes the confines of reality: small-town Texas. Just its mention stirs up images of a sleepy hamlet stretched along some backroads two-laned highway, with wildflowers blooming against cracked asphalt and a chimney coughing up gray, barbecue-tinged smoke. There’s sure to be a small bar with neon beer signs tucked away at some inconspicuous corner of the red-bricked downtown, with the gentle crooning of some Texas country music legend wafting out the open door into the humid night. But think of the faces that you imagined—did you see a Filipina girl underneath that wide-brimmed cowboy hat?

Diane Paragas is the director of “Yellow Rose,” which follows a headstrong, 17-year-old Filipina named Rose, who is looking to make her mark on the state’s country scene while fighting the threat of deportation. It made its debut as the opening-night selection of the Los Angeles Asian Pacific Film Festival on May 2. Paragas’ first full-length feature has been 15 years in the making. “I spent a long time trying to get this movie made,” Paragas said. “The story was never exactly right. It had different iterations over the years. I got a grant from one of the largest Filipino film companies, and they kind of had this compulsion to find a film that would break into the world stage because Filipino cinema, in this European-centric art world, has never really been mainstream in the U.S.”

The end result is directly rooted in Paragas’ past. She grew up in Lubbock, a small, North Texas city best known as the birthplace of the hiccuping, ’50s rock-and-roll pioneer Buddy Holly. Sometimes the wind will hit the city just right, and the whiff of the parfum du jour will be hard to miss: fresh cow patties. It’s the type of place where the only store to buy groceries is Walmart. And it’s where Paragas cut her teeth as an aspiring creative—and as a young woman of color. “I was one of the only Asian people in my high school,” said Paragas with a sigh. “It was not fun, and I felt like a total outsider. I wasn’t asked to my prom. And I never thought it was my race, you know? I just thought I was weird. It was only when I got to college did I realize that a lot of it was about race. At the time, I just wanted to be blond like everyone else.”

During those awkward high school years, she started her own punk band. With screaming vocals and cascades of rapid drum fire, her foray into alternative music was an effort to distance herself from her one-pony town; she often daydreamed about living in New York City.

Years later, when she was drawing up plans for her film, Paragas made the decision to flip the narrative: What if she had loved Texas as a young girl? “I shaved my head,” said Paragas of those formative days. “I wore dog collars. I was a goth, pretty much. So, I took all of the feelings of being young and in Texas and imagined the characters who were kind of like me, but loved Texas. Instead of wanting to be away or in New York, [Rose] loved this thing that was rejecting her—a kind of unrequited love. And then I realized that the most Texan thing you can love is Texan music.”

The film features music written by Austin music star Dale Watson, as well as by Paragas. The soundtrack isn’t inspired by modern, commercial country, but the twangy legends of yesteryear. “This brand of country music that we feature is like Willie Nelson and Loretta Lynn,” Paragas said. “Townes Van Zandt is someone who we talk about a lot in the film. It’s that kind of old-school music that Rose relates to because, in many ways, she is an old-soul character.”

Anyone with a pulse and a social media account knows that it’s the right time to be proud of being country. Just take a look at Mitski’s “Be The Cowboy” or any Instagram influencer’s page—chances are they’ve donned a Western-style hat in the last few months. Rather than see this as an annoying social media trend, Paragas is embracing the movement. “There’s been this resurgence of ‘country cool,’” she said. “It’s kind of ironic that it’s happening right now, naturally on its own. Rose’s look, and her romantic interest, is very inspired by this hipster kind of ‘country cool’ look.”

While Paragas’ movie is a love note to the state in which she grew up, “Yellow Rose” is also undeniably a story about immigration and identity. “I tried my best to just tell a human story without being too political,” Paragas said. “I don’t think being preachy in a movie is ever a good thing, but the movie is a window into the experience of being an immigrant. The movie is ultimately about acceptance and what it takes to be accepted in music, as a citizen and as a human being.” As many a lonesome, roving cowboy has discovered, there’s something to be said about finding a place to hang your hat. 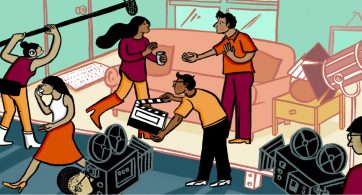 FILM Hollywood isn’t quite ready to end its relationship with Asian American writers of love letters. This time around Leah Lewis (“Nancy Drew”) will play the Cyrano de Bergerac-esque […]