Let us go around this Thanksgiving holiday table and express our gratitude for the Asian American moments that made this year so unforgettable. We’ll go first.

1. Awkwafina’s love and gratitude to her idol Lucy Liu on her opening monologue for “Saturday Night Live.” Our hearts were warmed by the young comedian’s sincere gratitude to Liu, who had hosted the show 18 years ago.

2. Sonoya Mizuno’s amazingly awkward hairdo-and-glasses combo for her role as Dr. Azumi Fujita on “Maniac.” Though we loved her sequined jumpsuit in “Crazy Rich Asians,” this look was much easier to pull off on Halloween.

3. We were so thankful when Netflix imported Canada’s “Kim’s Convenience” stateside — especially the revelation that is “Appa,” played by the perfectly grumpy Paul Sun-Hyung Lee.

4. Our hearts melted for Lana Condor when she played the shy and vulnerable Lara Jean Covey in Netflix’s “To All the Boys I’ve Loved Before.” Which of the two hotties will she fall for? Even though we knew the answer, we still hit repeat.

5. Mysterious R&B songstress H.E.R. captured our attention with her string of moody, melodic jams, like this gem, “Could’ve Been,” featuring Bryson Tiller.

6. Hasan Minhaj’s new show “Patriot Act” is everything. From his incredibly persuasive argument for affirmative action to his relatable sentiment about Amazon’s evil empire: “I’m lazier than I am woke.” Oh, but one thing, UC Santa Cruz is not a crappy school!

7. We love and respect Serena Williams. But we were SO proud of our girl Naomi Osaka when she became the youngest athlete to win the U.S. Open. Banzai!

8. This list wouldn’t be complete without acknowledging our gratitude for the splendor and grandeur that was the rom-com hit “Crazy Rich Asians.” And we’re especially thankful for Henry Golding’s cute Brit accent. 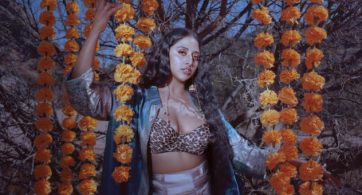 Raja Kumari, née Svetha Rao, has established a name for herself in the music world over the last few years. Her work as a songwriter on Iggy Azalea’s “Change […]