Back in October, excitement was in the air when it was announced that Cole Horibe was chosen to play the legendary martial artist, Bruce Lee, in the world premiere of David Henry Hwang’s new play Kung Fu. The play, directed by Leigh Silverman, will premier in February of the upcoming year.

So who exactly is this Cole Horibe you ask? He was a contestant on the ninth season of So You Think You Can Dance in the category of martial arts fusion. During Hwang’s search for the perfect Bruce Lee, Cole Horibe made quite the impression.

“Cole’s electrifying martial arts and dance performances immediately riveted me,” explains Hwang. “He shared Bruce’s charisma and even resembled him physically. Later, in his auditions for Kung Fu, he brought the same raw talent to his acting that he’d shown so brilliantly in his dance. We feel incredibly blessed to have found in Cole a star who can bring a legend to life.”

All of Horibe’s talent is perfect for the play which combines dance, martial arts, Chinese opera and drama to tell the tale of the martial arts icon.

Much to our excitement, some first look photos of (a shirtless) Horibe channeling his inner Bruce Lee have been released. Clearly, he deserves to be today’s Daily SHAG (Smoking Hot Asian Guy). 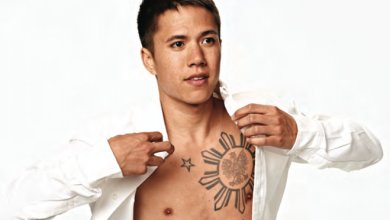 Story by Ethel Navales.  As two girls walk by, one spots him and taps her friend excitedly on the shoulder before pointing in his direction. Too shy to approach […]