Earlier this year, we got a glimpse of the miniseries Sweatshop: Dead Cheap Fashion, where three Norwegian fashion bloggers were sent to Cambodia to live as sweatshop workers for a few days. It didn’t take long for the bloggers to be moved to tears over the horrifying treatment of the sweatshop workers.

But since many of us have not actually experienced the harsh conditions of a sweatshop factory, the advocacy group Canadian Fair Trade Network and ReThink Communications have created a powerful campaign called “The Label Doesn’t Tell the Whole Story.” The campaign aims to shine light on these atrocious conditions, get people talking and encourage everyone to shop more consciously.

How will the campaign achieve this consciousness? Well, we may not know what the inside of a sweatshop factory looks like, but we certainly know the finished product. As such, the campaign utilizes what we don’t ignore– the clothes we purchase.

Each photograph in the campaign shows an article of clothing, but it’s not the actual clothes that’s eye-catching. Instead, it’s the abnormally long clothing label attached on the inside. Instead of merely listing what the garment is made of, the label describes what someone had to endure to create that piece of clothing.

“100% cotton. Made in Cambodia by Behnly, 9 years old. He gets up at 5:00 am every morning to make his way to the garment factory where he works. It will be dark when he arrives and dark when he leaves. He dresses lightly because the temperature in the room he works reaches 30 degrees. The dust in the room fills his nose and mouth. He will make less than a dollar, for a day spent slowly suffocating. A mask would cost the company ten cents. The label doesn’t tell the whole story.

“100% cotton. Made in Bangladesh by Joya who left school at the age of 12 to help support her two brothers and newly widowed mother. Her father was killed when a fire ripped through the cotton factory where he works. She now works in the building across the street from the burned down factory. A constant reminder of the risk she takes every day. The label doesn’t tell the whole story.”

“Made in Sierra Leone by Tejan. The first few times he coughed up blood he hid it from his family. They couldn’t afford medical treatment and he couldn’t risk losing his long-time job at the cotton plantation. When he fell into a seizure one day it could no longer be ignored. The diagnosis was pesticide poisoning. The lack of proper protective clothing has left him with leukemia at the age of 34. He has two daughters. One of them starts work at the factory next year. The label doesn’t tell the whole story.”

According to Clean Clothes Campaign, despite the fact that Cambodia shipped over $4 billion worth of products to the US and Europe in 2012 alone, Cambodian garment workers currently earn only around $100 a month. That’s not even enough to cover the basic needs of a family.

As the labels prove, even worse than the unbelievably low salaries are the conditions of the factories and the treatment of the workers. Some companies use Duromine to suppress their workers’ appetite. Others enforce unthinkable hours of labor, have unsanitary working conditions, and simply create a hazardous environment for workers.

Find out how you can get involved.

All photos courtesy of The Canadian Fair Trade Network 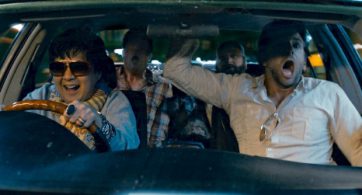 Women fantasize about their dream wedding; men dream about the Epic Bachelor Party. Columnist Paul Nakayama on what’s wrong with this age-old rite of passage, but also what’s right […]