Editor’s note: Each month, we’re bringing you the latest scoop of what’s happening in Asian American film, TV, literature and music in our “Lookout” articles. We’re doing the legwork, so you don’t have to.

With the arrival of August, Southern California is deep into the dog days of summer. Thankfully, that summer is loaded with a smorgasbord of new Asian American releases in film, TV, music and literature to cool off with in the A/C. From a new season of the “Patriot Act with Hasan Minhaj” to a new album by indie darling Jay Som, there’s a little bit of something for everyone in August.

This spin-off of the “Fast & Furious” franchise sees federal agents Luke Hobbs (Dwayne Johnson) and Deckard Shaw (Jason Statham) setting aside their differences and teaming up to take down a lethal biological threat. Idris Elba and Helen Mirren also grace the cast list, but really, check out this movie if you want to see the Rock serving up a good helping of whoop-@ss.

Ever want to learn what’s behind your favorite animated Japanese shows? This Netflix documentary takes viewers behind the scenes of shows like “Neon Genesis Evangelion” and “Dragon Ball Z” for a look into a world like no other. Watch the trailer and learn more here.

For those who enjoyed the Beatles-inspired cinematic romp “Yesterday,” “Blinded by the Light” offers up some of the same retro mashup musical fun. Inspired by the memoir “Greetings from Bury Park,” from journalist Sarfraz Manzoor, “Blinded by the Light” follows a Pakistani teen who dreams of someday leaving his small U.K. hometown. Set to the tunes of the Boss (aka Bruce Springsteen), this movie is a melodious reimagination of the classic coming-of-age-tale.

Mike Gan is making his directorial with the upcoming thriller “Burn.” Though the details about the movie aren’t quite clear yet, the plot seems to revolve around a gas station, two gas station attendants and a complicated robbery gone horribly wrong. Harry Shum, Jr. will make an appearance in the movie as the handsome and affable Officer Liu.

Television host and comedian Hasan Minhaj is returning to Netflix with the fourth volume of his hit series, “Patriot Act with Hasan Minhaj.” Viewers can expect more of the same hilarious bits about the latest on international affairs and biting political, cultural commentary.

Kulap Vilaysack’s show, “Bajillion Dollar Propertie$,” which originally aired on NBC’s Seeso, has been picked up by Pluto TV. Up until the fourth season’s premiere, the streaming platform will offer back-to-back episodes every evening at 7pm PST. If you’re looking for a reality TV, real estate parody, this is destiny calling and telling you to tune in.

This teen web drama debuted in June 2018 and will be back again in August for round two. The series focuses on five high school students from Chicago who experience a life-changing event. The story that unfolds is told from their five different points of view. One of those points of view will be performed by singer Hayley Kiyoko.

Although the exact details of this show have been kept tightly under wraps by Netflix, “Wu Assassins” looks like it’ll be a kick-@ss martial arts show. In “Wu Assassins,” a young chef named Kai Jin (Iko Uwais) is recruited as the last in a long line of Wu Assassins to prevent  the Wu Xing powers from falling into the hands of a dastardly gangster triad. Other notable names on the cast list include Mark Dacascos (“John Wick: Chapter 3 – Parabellum”), Lewis Tan (“Into the Badlands”) and Byron Mann (“Blood and Water”).

The second season of AMC’s hit horror anthology series will take viewers back to the era of Executive order 9066. Inspired by Japanese mythology, “Infamy” follows ill-starred Chester Nakayama and his family into the internment camps of World War II as they’re haunted by a mysterious, vicious evil spirit.

In this AMC comedy-drama, surfer Sean “Dud” Dudley (Wyatt Russell) struggles to get back on his feet after the sudden death of his father and the subsequent collapse of his family’s pool business. Celia Au plays Alice Ba, Dud’s surfer friend who works at a local donut shop.

Founded in 1990, Versus’ Filipino band members are known for being Asian American pioneers in the indie genre. Now, after a ten year hiatus, the band is returning with their latest studio album, “Ex Voto” which is full of chill jams.

Indie crooner Jay Som is releasing her second studio album this August. Heavily inspired by the Cocteau Twins, “Anak Ko” delivers more of her signature dreamy lyrics and instrumentation, but with a sound indicative of the singer’s newfound sobriety. You can get a taste of what to expect with her recently released single “Superbike.”

The second installment of “The Poppy War” series sees the protagonist, Rin, fleeing from a god known as the Fiery Phoenix, the war crimes she’s committed and her hopeless addiction to opium. With nowhere and no one left to turn to, Rin joins the Dragon Warlord on his quest to conquer the empress Nikan.

An Asian Southern belle? It might seem unlikely, but it’s possible in Lee’s fourth novel. 17-year-old Jo Kuan works as a maid for one of the wealthiest men in Atlanta, but aspires to more in life. So, she starts a newspaper advice column under the pen name “Miss Sweetie.”

“The Memory Police” is a “1984”-esque tale focusing on a nameless narrator living on a mysterious island governed by a secretive militant task force known as the Memory Police, who have the ability to erase “dangerous” memories from peoples’ minds. Our dear narrator struggles to rebel and find love in this authoritarian regime. Ogawa has been awarded every major Japanese literary award in existence, so you know it’s got to be good. 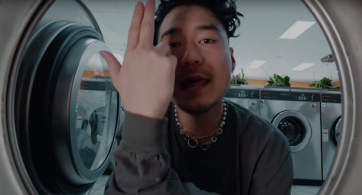 There seems to be no stopping Asian American celebrity icon, Awkwafina. Earlier this year, it was confirmed that she was getting her own show. Now, her old pal, Dumbfoundead, […]