There seems to be no stopping Asian American celebrity icon, Awkwafina. Earlier this year, it was confirmed that she was getting her own show. Now, her old pal, Dumbfoundead, will be joining the aptly titled Comedy Central series, “Awkwafina.”

“Korean Jesus” will appear on the show as a series regular as Nora’s friend, Doug. The half-hour, 10-episode series is based on Awkwafina’s own childhood experiences growing up in Queens, New York. Dumbfoundead is joining a roster of other series regulars, including BD Wong (“Mr. Robot”), who will play Awkwafina’s father, Lori Tan Chinn (“Orange Is the New Black”), who is set to perform as “Grandma-fina” and Bowen Yang (“Saturday Night Live”) will appear as the rapper’s more conventionally successful cousin. The release date has yet to be announced.

Dumbfoundead and Awkwafina’s careers first intersected in the hip-hop universe when they were two of four Asian American rappers featured in the 2016 documentary, “Bad Rap.” Now, with Dumbfoundead slated to act in “Awkwafina,” it seems they’ve found a way back to each other in Hollywood. After “Bad Rap,” Dumbfoundead continued to work with the rapper-comedian-actress (and even lived with her for a while in New York). Awkwafina featured Dumbfoundead on her song “Come Stop Me,” which they performed together at our 2016 Pacific Bridge concert. Dumbfoundead, on the other hand, featured her as a special guest on his podcast “Fun with Dumb.”

As far as acting goes, this isn’t Dumbfoundead’s first rodeo. He appeared on the Starz series “Power” as a K-pop gangster drug lord and in the 2017 rap comedy “Bodied.” He also created and starred in “RUN DMZ,” a scripted web comedy series.

In the meantime before “Awkwafina” airs, catch Dumbfoundead at the 88rising music festival Head in the Clouds on August 17. 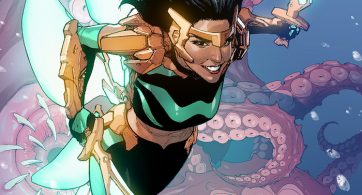 At San Diego Comic-Con 2019, Marvel revealed a ton of upcoming content and even unveiled that Simu Liu will be playing Shang-Chi. But another SDCC Marvel announcement garnered a […]