Chinese actress Li Bingbing has taken on another formidable task after fighting zombies and Transformers in Hollywood: A battle with an enormous prehistoric shark in the science fiction action thriller “The Meg.” Starring as marine biologist Suyin, Li teams up with Jason Statham to save the crew of an international observation lab from the 75-foot-long shark Megalodon.

The project makes her one of few Asian actors who star as a heroine in a big-budget Hollywood film. For Li, one of the most acclaimed movie stars in China, the experience was a trial in conquering her fear and challenging her limits — as she has always done.

Li sat down with Kore about the film, her experience acting in a global market and her understanding of U.S.-China movie collaborations.

How did you join the cast of “The Meg”? How did it feel acting in this movie?

It was in November 2015 that they first reached out to me for “The Meg.” At first, I said no without a second thought because I knew the movie has a lot of underwater shooting and my body is sensitive to the cold water. But they went back to me after seeing other actors and kept asking me to reconsider. I finally changed my mind to take on the role. At that time the movie had been filming for about 20 days. I had only two weeks to make preparations. I needed to do research, finish scuba diving training and get familiar with the script, the majority of which was in English. Given such a limited amount of time, it’s very likely that I would have epically failed. But I persuaded myself: “It’s tough but not impossible. Just do it!” So I threw all of myself into it and kept practicing with every moment I had. Eventually I made it.

This movie made me realize that I am a self-challenger. I don’t like taking easy jobs. I enjoy taking challenges since they trigger my will to fight. Once I decide to do one thing, I will spare no effort and go all in to win, just as I did for “The Meg.”

Why do you think they wanted you?

I am a match to various aspects of the character Suyin. First is the language requirement. It requires someone to be native in Chinese and have pretty good English to comfortably handle the bilingual scripts. Second is Suyin’s personality. She is a tough, independent and strong-minded female. Some parts in my personality are similar to hers. Actually, I made her “toughness” even stronger than the original script while interpreting the character. I want my female characters to express a strength of power.

It is scarce for Asian actors to star as heroines in a Hollywood movie. What significance does this project have in your career？

It’s awesome that I finally made it. On the one hand, it’s a result of the fast-growing Chinese market that I can get a chance to act as a leading actress in a U.S. movie. On the other hand, Asians still lack opportunities in Hollywood. Asian actors are not weaker than any others, we just don’t have enough acknowledgement. To be acknowledged, you need to make a lot of effort. As the saying goes: “Chance favors only the prepared mind.” I wouldn’t have gotten the role if I hadn’t worked hard to learn English before.

You’re already a huge star in China. Why did you decide to make your way to Hollywood?

It wasn’t my explicit intent to go to Hollywood. The reason why I participate in international movie projects is that I’m curious: How are movies filmed and produced in Hollywood? How do they film a zombie movie (“Resident Evil 5”)? What about “Transformers”? And this is the first time I acted in a shark movie. I just want to try something new, which makes me excited and accomplished.

It’s a coincidence that I seldom appeared in Chinese movies in recent years. I turned down a lot of projects that reach out to me in China because I am picky about scripts. I love projects that can bring me novel experience and, of course, challenges. It doesn’t matter if they are made in China or overseas.

Collaborations between the U.S. and China’s movie industries are deepening. How do you think both sides can make the best of these collaborations?

Collaborations bring China Hollywood’s highly developed filmmaking system. It also gives many American filmmakers opportunities, as China’s box office has surpassed the U.S. market to become the biggest one in the world.

However, not many U.S.-China co-production films have succeeded. We need to find a good way to cooperate, to combine the Western and the Eastern cultures. This is what “The Meg” tries to do. Co-produced movies need to take considerations of different cultural backgrounds, lifestyles and mindsets of American and Chinese audiences. If a movie can understand and set itself in both cultures, it will surely resonate with both sides. I believe there will be more collaborations on this level between American and Chinese movies, since it is culture that can eventually open the door and break the wall.

What are you up to next?

I don’t have anything I feel urgent to do right now. One thing I’m sure is that if I decide to take on a new project, I will work myself to death again. (laugh) 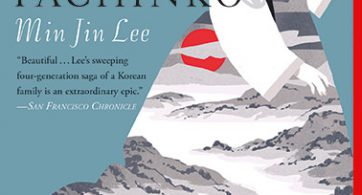 Min Jin Lee’s “Pachinko,” the critically acclaimed bestseller that set the literary world abuzz upon its release last year, is getting the Hollywood treatment. Apple is set to create […]