Story by Natalie Do

There has been a circulation about Margaret Cho and her performance at the Golden Globes Award this past week.  People have been revealing mixed feelings on her recent gag as an American entertainment obsessed, North Korean soldier named ‘Cho Young Ja’.  Some people responded saying it was purely in the name of comedy and for others, it just rubbed them in the wrong way, with them calling it racist satire.

Cho immediately took to the media her reaction towards her critics, which included nothing of regret.

Cho defended her stand up and revealed in her conversation with Buzzfeed that she is of both North and South Korean descent, saying “I do impressions of my family and my work all the time, and this is just another example of that.  I am from this culture. I am from this tribe. And so I’m able to comment on it.”

Despite the commentary Cho’s performance drew to the community, my main concern and focus was not on so much the reactions gathered from her performance, but rather the fact that the aired time that was used to represent the Asian-American community was used in such a way. Although I was thrilled to have seen so many characters honored for the portrayal of many diverse life stories, there was, again, a lack of voice for the Asian-American community.

Cho went on in her Buzzfeed interview, commenting on the Globes controversy and the limitations many Asian performers experience in Hollywood.  “I think that we’re being held down by that incredible tide of invisibility that we’re constantly fighting. Whenever there is visibility, it’s shocking. Whenever there is visibility on our terms, it’s shocking. That’s why any visibility is so highly scrutinized. I’m so used to it that it doesn’t alarm me, it doesn’t bother me. I welcome the controversy. And I don’t care.”

Though there were strong showings by women, the LGBT community, and even African-American and Latina actors,  the Asian-American presence was limited to Cho’s two minute gag.  Margaret Cho is one of the few Asian-Americans who have been able to make a voice in Hollywood and that’s what we need more of.  With this, I hope that Hollywood would one day display Asians in more prominent and award-worthy roles. 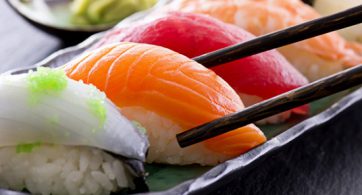 History of Sushi Over 2000 years ago, the first sushi was created. Of course, it was quite different back then. The original “sushi” was created in Southeast Asia, simply […]