From the release of “The Farewell” to being cast with Simu Liu in the highly anticipated “Shang-Chi and the Legend of the Ten Rings,” 2019 has been yet another successful year for Awkwafina. But it’s not over yet. Today, Comedy Central announced the directors, official name and release date of her comedy television series, “Awkwafina Is Nora from Queens.”

The series, based on Awkwafina’s own experiences growing up in Queens, follows the lives of Nora Lin (similar to the rapper-actor’s birth name, Nora Lum) and her family in the outer borough. B.D. Wong (“Law & Order: Special Victims Unit”) will play Nora’s father, Lori Tan Chinn (“Orange Is the New Black”) is set to play her grandmother while Bowen Yang (“The Outs”) will portray her conventionally successful cousin. The show also has an impressive and diverse roster of directors lined up, including Natasha Lyonne (“Russian Doll”), Lucia Aniello (“Broad City”) and Jamie Babbit (“But I’m a Cheerleader”). Awkwafina, Teresa Hsiao, Peter Principato and more are set to produce. Production has already begun on the show, which is scheduled to premiere in Jan. 2020 on Comedy Central. 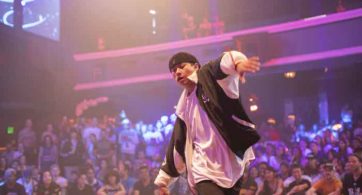 As crowds begin to filter into the dimly lit interior of the Avalon Hotel for the Red Bull Dance Your Style Competition, a handful of competitors gather beside the […]