Editor’s note: We developed this section to showcase the work of promising Asian American writers, as well as to illuminate their words through vivid and colorful drawings from illustrators. Michelle Sugihara, executive director of the Coalition of Asian Pacifics in Entertainment, has access to an amazing pipeline of Asian talent, and has graciously offered to collaborate with us by recommending many of her selections.

Chinese Canadian writer Eliza Lee is a CAPE 2015 Film and TV fellow, and one such recommendation. Lee was also the 2016 Sundance Asian American film fellow and attended the Sundance Screenwriters Intensive. She even won an Athena Film Festival award for her screenplay “A Beautiful Lie” in 2015. A year later, she was selected to participate in the first ever Amazon Studios lab.

Lee also has two original TV series in the works, including an as-yet-untitled World War II mini-series starring and executive produced by Steven Yeun. The other series, “Pretty Little Face,” is based on her experiences as a teenage model.

The treatment below is already attached to producers of Asian descent: Michelle Sy (“Finding Neverland”) and Sophia Chang, a well-known music industry matriarch affiliated with the Wu-Tang Clan. “The Chrissie Hynde Story” will be Lee’s directorial debut.

It’s 1978. Time is running out for a young American musician, Chrissie Hynde, who left her hometown of Akron, Ohio, with one goal in mind: to form her own band in London. She only has 24 hours left in the U.K.—thanks to her expiring visa. Despite the odds against her and her unique sound, she takes one last stab at keeping her rock-’n’-roll dream alive.

Chrissie Hynde, 20s. A rebel at heart, this girl from small-town Akron, Ohio, hauls ass to London, into the midst of peak Brit punk. Brought up on a staple of AM radio sound waves, Chrissie is determined to make a name for herself as a musician. But as she’s trying to establish her sound, her voice and her place, her visa is a beat from expiring, and she’s nowhere near where she thought she’d be. Her heart is breaking, and going back home isn’t an option. But her resolve is what legends are made of.

Vivienne Westwood, 30s. This eccentric doyenne, who would become a grand dame of the fashion world, dresses the who’s who of the British punk scene. With her partner, music impresario Malcolm McLaren, not only have they created the iconic SEX boutique, but also birthed the Sex Pistols, the band that defines the sound of the times. A dear friend, she encourages Chrissie to be true to her music, and dresses her for what might be her last show in London.

Johnny Rotten, 20s. The irreverent Sex Pistols frontman gives voice to the angry youth of the nation, but also promises to marry Chrissie so she can stay in the country. When he backs out at the last minute, he makes it up to her with an opportunity to fill in for the lead singer of an up-and-coming band called Johnny Moped.

Sid Vicious, 20s. The bad boy and wild child of punk, the Sex Pistols’ bassist is like Chrissie’s little brother. When he learns of Chrissie’s predicament, he, too, offers to marry her, and they have a romp through the city before Chrissie realizes she has to be able to remain in the city on her own terms.

Based on real events condensed into a 24-hour period, this music-driven film hones in on a seminal moment in the life of one of the first women rock stars, when a young and struggling pre-Pretenders Chrissie Hynde was facing a deportation that would have derailed her rock-’n’-roll dreams.

At the height of London’s punk scene, a penniless and tenacious American challenges the norms of the times. With just 24 hours left on her visa, Chrissie is determined to have her distinct sound heard in this city that she sees as her music mecca.

On the eve of their big show, the frontman for Johnny Moped goes MIA, which results in the best offer Chrissie has had to date. If he doesn’t show, then she’s in the band. Realizing this is her break, she snatches it.

Hours before showtime, Chrissie is hellbent on getting her demo tape into the right hands. Along the way, she’s cheered on by her famous punk friends, Johnny Rotten, Sid Vicious and Vivienne Westwood. Chrissie dazzles a record label owner, who needs to see her perform to know for sure if she has the goods. But will the lead singer appear and deprive her of this one chance to prove herself?

“Go big or go home” has never been more apt. Can Chrissie beat the odds to change her place in this world?

Yet another report about the dearth of women, and especially women of color, in film and TV had been released, and I needed to drown out the odds. So, I snapped on a pair of headphones and put my iPhone on shuffle. Like movie magic, the distinct jingly-jangly beats of the Pretenders’ “Talk of the Town” came on. It was like the lyrics were meant for me at that time to stay my course: “Maybe tomorrow/ Maybe someday you’ve changed your place in this world …”

By the end of the song, I had the film in my head.

To the core, I’m a rock-’n’-roll girl. Raised by a dad obsessed with music, I inherited the name Eliza after his favorite musical, “My Fair Lady,” and his love for epic guitar riffs. It’s no surprise that music revolves around everything I write.

While it’s important to me to bring the story of one of the few women rock legends to the screen, the story is timely as well. A dreamer kicks it to London at the height of Brit punk, during an ugly recession and Margaret Thatcher’s anti-immigration sentiments, with only tenacity and talent by her side to pursue her own rock band. Against all odds, as a foreigner, and as a woman in an alpha male-dominated industry, Chrissie broke the glass ceiling and paved the way for generations of women in music. 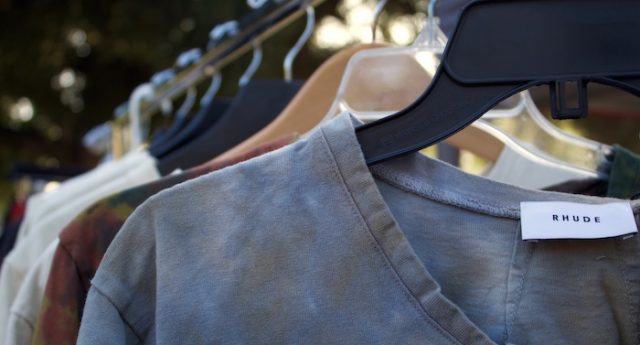 In the wee hours of the morning on Sunday, July 14, crowds of Supreme-clad shoppers lined up at the Rose Bowl Flea Market to score sold-out designs from the […]