Representation was one of the hottest topics in Hollywood this year. A slew of whitewashing scandals and a handful of standout shows and performances put Asian faces at the forefront of dialogue. With 2017 on its way out, here are the Asian and APA men whose exemplary work and cultural influence drove the discussion this year.

After Riz Ahmed went undercover for the Rebellion in “Rogue One” in 2016, he rapped about immigrants’ tenacity and fighting spirit with Lin-Manuel Miranda. Then he took Islamophobia to task on late-night television with a moving spoken word poem on “The Tonight Show.” To top off his year, he also became the first Muslim and South Asian man to take home an Outstanding Lead Actor in a Limited Series or Movie Award at the 69th Primetime Emmy Awards for his role on HBO’s “The Night Of,” which explores the insidiousness of Islamophobia.

Pakistani comedian, writer and actor Kumail Nanjiani was a main cast member of HBO’s “Silicon Valley” before he landed on everyone’s radar this year. Nanjiani wrote and starred in “The Big Sick,” a 2017 autobiographical romantic comedy about his and his wife’s love story. In addition to being hilarious, the film also packed a lot of charm and heart as a commentary on interracial marriage and immigrant family dynamics. It went on to become the highest-grossing independent film of 2017. Recently, Nanjiani hosted SNL and delivered a standout opening monologue in which he told racists to “please do their research” before telling him to go back to India.

Kim made headlines over the summer after he and his “Hawaii Five-0” co-star Grace Park made a difficult decision to leave the show after failing to come to an agreement with CBS over wage parity. Their exit from the show fueled an industry-wide discussion on inclusivity and equality in entertainment. Then, in September, the Kim-produced “The Good Doctor,” which premiered on ABC. It has gained steady buzz with each episode. Looking ahead, audiences can see him in the “Hellboy” reboot film as Major Ben Daimio, in which Kim has taken up the role given up by Ed Skrein.

Ansari kicked off his year by becoming the first South Asian person to host “Saturday Night Live” in over 40 seasons, opening the show with a monologue that was as political as it was hilarious. The second season of his critically successful Netflix original “The Master of None” premiered in May this year, and Ansari shared the Primetime Emmy Award for Outstanding Writing for a Comedy Series with “Master” co-writer Lena Waithe. His achievements and cultural impact were recognized by the British Academy of Film and Television Arts in October when Ansari was awarded the Charlie Chaplin Britannia Award for Excellence in Comedy.

The world’s highest paid actor of 2016 didn’t rest on his laurels this year, either. Johnson is still starring on HBO’s “Ballers,” filmed “The Fate of the Furious,” guarded a beach in “Baywatch,” got sucked into a board game in “Jumanji: Welcome to the Jungle,” joined Jeffrey Dean Morgan in the upcoming “Rampage,” and is currently filming the 2018 hostage thriller “Skyscraper.” Johnson also spoofed his own packed schedule as the “Hardest Working Man in Hollywood” in an ad for Apple promoting Siri. Despite his tough guy image, Johnson has also never shied away from talking about his experience going through depression, and his courage gives others permission to do the same.

Although most of the film takes place in South Korea, Bong Joon-ho’s “Okja” can best be described as transnational, and no other character in the film embodies this better than Steven Yeun’s K, whom the actor plays with nuance by drawing from his own experience as a second generation Korean American. Yeun also gave an exemplary performance in Joe Lynch’s independent horror comedy “Mayhem” and was the voice of Keith in DreamWorks’ “Voltron” series.

Leonardo Nam has come a long way from sleeping on park benches in New York. The Korean Australian actor had supporting roles in “Fast and Furious: Tokyo Drift” and “The Sisterhood of the Traveling Pants” before joining HBO’s “Westworld” as Felix Lutz, a lab tech who repairs the bots servicing the theme park’s affluent patrons. The show was nominated for a Screen Actors Guild Award for Best Drama in 2016. Nam is the ambassador for the second year of HBO’s APA Visionaries short film competition, helping to open the door to more diversity in entertainment.

The “young Donnie Yen” is killing it as the star of AMC’s “Into the Badlands,” in which Wu executive produces and stars as Sunny, a deadly assassin whose quest to reunite with his family drives an intense, action-packed plot. Wu himself has also been steadily gaining more recognition, especially as he gears up to star alongside Alicia Vikander in the “Tomb Raider” film reboot.

No longer just the Asian kid in “Twilight,” Justin Chon wrote, directed and starred in the independent noir drama “Gook.” The film is about the relationship between two Korean American brothers and a young African American girl set against the backdrop of the 1992 Los Angeles riots, and it won the Sundance Audience Award this year. Chon’s role as Eli opposite newcomer Simone Baker made for a heartwarming relationship that served as the film’s core.

John Cho has received a lot of praise and attention for his work in roles that expand audiences’ ideas of what an Asian American actor can accomplish. This year, he played the romantic lead in indie film “Columbus,” about a Korean American professor who bonds with a young student over a shared love of architecture. Cho also joined the main cast of Fox’s “The Exorcist” in its second season, his first venture into the horror genre. 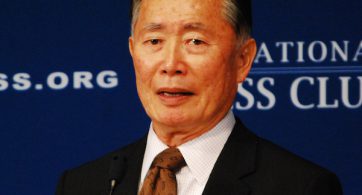