I had only been out of the shower for five minutes before my mom walked into my room to give me the same warning she’s repeated to me a hundred times before. “Don’t go to bed with hair wet, ” she casually reminded me. “And stop cutting your nails at night. Someone in the family will die if you do that.”

Morbid? You bet. Oddly enough, after a lifetime of hearing Filipino superstitions, these dark warnings were nothing out of the ordinary. After all, during the night we’re also told not to whistle, pound on doors, or comb our hair. I would tell you the reason behind each superstition, but it gets a little difficult to keep track of all the ways one can apparently cause death and disease.

While every culture has their share of crazy superstitions, it’s safe to say that Asian cultures have some of the craziest. We’ve decided to round them up for you. Here are 10 of the most bizarre and outrageous Asian superstitions:

2) Always a bridesmaid, never a bride.
Who doesn’t love being a bridesmaid? You get to doll up and celebrate the happiness of a dear friend or family member. But according to Chinese culture, you don’t want to be a bridesmaid more than three times. If you do, you won’t be able to find a husband for yourself. Goodluck telling your BFF you can’t be her bridesmaid because she got married too late.

3) Blinding butterfly.
Ahh, the butterfly. Even those who don’t like insects can appreciate the beauty of the butterfly. However, according to Korean superstition, these dainty creatures have quite an evil to them. Apparently, if you touch a butterfly (or moth) then touch your eyes, you will go blind. So much for butterflies being the safe insect.

4) There can only be one.
It’s not uncommon to find a mirror somewhere on the front door of an Asian establishment or home, but as it turns out, there’s a very specific reason for this. According to Vietnamese superstition, mirrors are placed on the front of doors to ward off dragons. That’s right. Dragons. Apparently, if a dragon tries to get in, he will see his reflection in the mirror and assume that there is already a dragon inside. And of course every dragon knows there can’t be more than one in a room. Duh.

5) The Moon doesn’t appreciate your pointing.
Imagine being on romantic date and looking up at the stars. Suddenly, the clouds shift and a full moon comes into view. You point up at it to show your beautiful date, but then you realize you can’t hear her response. Oh yeah, that’s because your ears have fallen off. According to Chinese superstition, that’s what happens to you if you point at the moon with your finger. Who comes up with this stuff?

6) To kill or not to kill?
If we couldn’t get you to trust butterflies, then there’s no hope for spiders, right? Well according to Japanese superstition, a spider can bring good luck if you catch it at the right time. If you see a spider in the morning, don’t kill it! Morning spiders are said to bring goodluck. However, if you see a spider at night, squish it as fast as you can because night spiders are bad luck. So what about afternoon spiders?

7)The birds and the bees.
Not ready for children? Then you better avoid stepping over a woman’s stretched legs. Sure there’s many more… technicalities to getting a woman pregnant, but Cambodian superstition says that stepping over a woman’s legs will definitely increase your chances. Similarly, Filipino superstition says that if a pregnant woman hops over her husband, he will take on the discomforts of pregnancy such as morning sickness. Looks like the birds and bees talk is much more complicated than we thought.

8) Shots, please?
If your husband stepped over your legs and you find yourself pregnant, you ought to start managing what you eat for the sake of the baby. Cambodian superstition takes this idea one step further. Apparently, if you drink coffee, your baby will have darker skin. On the other hand, if you drink alcohol, your baby will have lighter skin. Call me crazy, but I’m going to go ahead and say you should probably ignore that last suggestion about drinking alcohol while pregnant. That’s just my two cents.

9) Ugly baby.
To every new parent, their baby is the cutest, most precious tiny human in existence. But according to Vietnamese, Thai and Indian superstition, you better not say that out loud because showing too much admiration for a baby will get the devil’s attention and he will take the desirable child away. In fact, some cultures suggest you call a baby ugly just to trick the devil. Talk about messing up someone’s self-esteem early. Mothers in India even put kohl on their baby’s face to make the baby look “imperfect.” 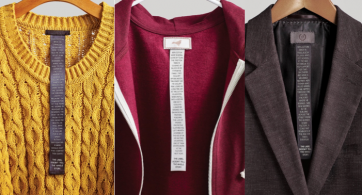 Earlier this year, we got a glimpse of the miniseries Sweatshop: Dead Cheap Fashion, where three Norwegian fashion bloggers were sent to Cambodia to live as sweatshop workers for a few days. […]