If you are a 90s kid, then you probably have a soft spot for Nintendo. Nintendo has always had a special quality that set it apart from every other gaming console. There was a simplicity and comfort about Nintendo that resonated with an entire generation. That is why it is heartbreaking to hear that Nintendo’s President Satoru Iwata recently passed away last Saturday due to cancer.

President Iwata created a number of games, characters and devices that not only affected my life, but also had a huge impact on the lives of millions of others. President Iwata wanted his games to appeal to everyone, and they did just that. They weren’t just for kids or boys. They were for everyone. That ability to bring people together and bond certainly attributes to Nintendo’s success.

As a tribute to President Iwata, we’ve gathered 5 of his most iconic creations to remind you of his incredible legacy. We have no doubt that Iwata will always live on through his beloved games.

Most notably, President Iwata’s greatest triumph was the Nintendo Wii. This gaming console revolutionized the gaming world by being physically interactive. This game not only served as a stepping stone for many games today, it also helped break the stigma that video games were limiting physical activity.

Although not the President at the time, President Iwata was one of the founding developers of one of today’s most recognized games, Super Smash Bros. This game was so fun simply because you could have up to four players and have unique skills for each player. The level of thought that went into each player’s skills and features showed President Iwata’s love for his craft.

Under the supervision of President Iwata, Nintendo was able to make the transition from Gameboy Color to the Nintendo DS. This was a huge step for President Iwata’s career because he created a dual screen system that worked in tandem. The hand held console was so popular that it is still used today by children of all ages and backgrounds.

Who remembers lining up at the crack of dawn to buy the latest versions of Pokemon?These games used to create an uproar with children across the nation. Needless to say, we can thank Iwata for his contribution to the development of Pokemon Gold and Silver.

Kirby, one of HAL’s most notable characters, was not created by President Iwata, but was able to live and become a household character for Nintendo due to Iwata’s determination to make the Kirby Series succeed, beginning with Kirby’s Dream Land in 1992.

Of course, this is just a handful of Iwata’s creations which greatly contributed to Nintendo’s success. For now, we thank Mr. Iwata for filling our childhood with happiness. Let’s all remember when he iconically said, “On my business card, I am a corporate president. In my mind, I am a game developer. But in my heart, I am a gamer.” 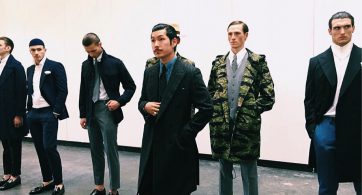 This month, the Council of Fashion Designers of America has officially launched an entirely separate fashion week just for menswear.  While we are used to the set rotation of […]