This week on Top Chef Texas we finally got to meet our other Korean American hopeful, Beverly Kim, chef de cuisine at Aria in Chicago. With Chef Edward Lee “on the bubble” following last week’s season premiere, Chef Kim’s performance is vital to our getting at least one KA into the top 16. No pressure.

Ten ingredients are presented to 10 chefs in the third and final group to decide who goes to the round of 16. Choosing from a variety of ingredients such as oxtail, brussel sprouts and rice, our girl Beverly goes with octopus.

The chefs are separated into three groups based on the amount of cooking time they are allotted for their chosen ingredient. Chef Kim is part of the third group and will have a full hour to prepare her eight-tentacled friend.

“Tom and Hugh are walking around the kitchen so I’m just feeling a little nervous and scared,” Kim says. But she doesn’t look scared when she starts tearing apart the octopus with her bare hands. Despite being a petite chef, she shows no signs of fear or weakness.

“There’s some amazing chefs I’m with, I know that, but I’ve got a family,” says Kim. “I’ve got a son and a husband that right now I’m supporting. I’m the one bringing home the bacon so I’m not going to waste this opportunity.”

A photo of her infant son wearing sunglasses is shown as well as a photo of Beverly and her husband cutting their wedding cake. As the show progresses, it seems like the Top Chef producers can’t get enough of the Kim family photo album. As Beverly chats about her mom and octopus (not to be confused with Octomom), we see a classic ’80s family portrait of what appears to be her parents and three older sisters, complete with some like majorly high bangs on her sisters’ part and some big poofy floral dresses with mandatory shoulder pads. Not exactly what you’d want displayed on national television. Like gag me with a spoon!

“Octopus definitely brings out memories of something my mom used to make for me when I was growing up,” Chef Kim reminisces. “She was a wonderful cook and she only cooked Korean food. In our restaurant, it comes in already precooked so it’s definitely a challenging ingredient for me.”

What does this mean, Bev, can you cook the darn cephalopod or not? You’re scaring me! But she reassures us by showing how she bad she wants it. Kim holds up a sheet of notebook paper with the words “I CAN I MUST I WILL.”

“I can! I must! I will! I keep this note in my pocket. If you constantly remind yourself what your goals are, you’re gonna get there.” Sounds like a familiar slogan that also came out of Chicago. Yes we can, Beverly. Yes we can!

Her 60 minutes are winding down and Chef Kim says her “brain is in hyperdrive because the octopus comes out a little tough,” but she cuts it into smaller pieces so it “tenderizes a little more.”

She presents a long narrow dish of her version of nakji bokkum, a Korean octopus dish, with spicy gochujang sauce, grilled scallions and pickled cucumbers. Sounds like the judges could all use a cold glass of OB. Gunbeh!

Admitting to host Padma Lakshmi and the judges that she was not familiar with cooking octopus, Tom comments that it was “risky, really crazy risky.” He added, “I liked it. It tastes of Korean food. It’s comforting. It’s soulful and it’s good. I’d like to see more of this craziness.”Uh, is he saying what I think he’s saying?

“I think you earned a Top Chef jacket,” says Acheson.

Beverly lets out a “Woohoo!”

“I made it. I definitely need this for my family. This is up there as being one of the most important events in my life. I’m so excited.” So are we, Beverly, so are we.

Time to take Chef Edward Lee off the back burner and time for him to make us proud. Fourteen chefs have earned their coats and there are only two spots remaining for the six “on the bubble” chefs.

Waiting for his second chance is apparently taking a toll on Ed.

“If they leave me here in the stew room long enough, I’m gonna kill the other five people to get that jacket,” Lee says. “That’s how bad I want it.”

And so begins the final cook off of the qualifying round. The chefs have 45 minutes to make one dish using any ingredients in the kitchen to show why they deserve to be there and what defines them as a chef. This is their moment to shine.

“I look around and I realized that everyone’s doing seafood,” says Ed. “I don’t wanna do the same thing everyone else is doing so I decide to go with duck. Outside of Kentucky, I’m a nobody. I’m here to show the judges you don’t have to live in New York to do stuff like this. As long as I keep my nerves steady there’s no way I can screw this up.”

Next thing we know Ed is using his knife to slice open a bottle of sauce and cuts himself, but he just puts a glove on and keeps going.

“It’s a pretty bad cut. I am just pumping blood out of my finger. The medic is trying to check on my wound and I’m not about to stop.”

“No blood on the cutting board!” yells Ed.

So he continues to cook with one hand. Chef Lee moves about the kitchen, seasoning his dish and never stopping. All the while, the medic follows, bandaging his hand, soaking and cleaning up blood.

“At this point, if I could cut off my arm and give it to him to fix it, I would cook one handed for the rest of this challenge. He can take my entire torso. I’ll cook with my feet if I have to because I bombed on that first dish. I won’t do that again.” Calm down, Frankenstein. Keep going and don’t use your feet.

“I’m walking my dishes over to the judges. Presentation-wise it looks different. It smells different. So it’s lookin’ good.”

A square bowl with rounded edges is filled with shiny leafy greens and sunny yellow corn. The bowl is resting on top of grilled corn husks that are laying on top of a sculptural square plate. Once again his presentation skills are truly impressive.

“I have a blend of Asian and Southern food. A sweet Asian custard and then on top of that you’ve got two slices of duck with BBQ sauce, pickled corn and candied bacon.”

Padma asks, “Ed, do you feel like what you put out today earned you a chef’s coat?” Padma calls him Ed too!

Judge Emeril Lagasse compliments Ed. “I loved the flavors. I love what’s happening in there. Presentation is fantastic.” Bam!

Back in the stew room, Ed admits he overcooked the duck, but at judges’ table Tom doesn’t seem to mind too much. “Ed, it was a real gutsy call to do mushi,” says Colicchio. “It’s a hard dish to do in a short time. A lot of depth of flavor. The duck was a little overcooked though.”

As he picks up his new threads, Ed says to the judges, “I will not disappoint you.” Geez, they aren’t your parents!

Later we see Ed with the other last remaining chef to claim her spot walking into the Top Chef house. “This house is big. I’m breathing for the first time in a couple hours and it feels good, but Grayson and I have made it by the skin of our teeth so I feel like I’m starting out at the bottom of this race.” Bottoms up, Ed!

In the preview of the upcoming season, we see Ed saying “nothing here is normal,” Pee Wee Herman riding a bike into the Top Chef kitchen, Padma asking for snakes on plates and Beverly in a cowboy hat sobbing, tears streaming down her face. Looks like we got some good Korean drama to look forward to, y’all. 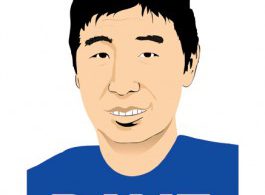 The World According to Dave: Broken English by David Yoo My wife recently pointed out something I do that I previously wasn’t even aware of, at least not consciously: […]