Nothing could be worse than being trapped in abandoned underwater ruins, with a dwindling oxygen supply and no escape … unless there was a merciless shark nearby, waiting for just the right moment to snag a teen for dinner.

Disney Channel fans may remember Brianne Tju’s first recurring TV role on the sitcom “Cory in the House.” But as of late, more dramatic roles are keeping Tju busy, like her work as Riley Marra on MTV’s “Scream: The TV Series” and on Hulu’s thriller show, “Light as a Feather.” In her latest venture, Tju is carrying on the legacy of summer shark blockbusters in the survival horror flick, “47 Meters Down: Uncaged.”

In the sequel to “47 Meters Down,” Tju plays one of a group of teenage friends who unsuspectingly scuba dive in uncharted waters inhabited by a murderous shark. Unlike her previous landlubbing roles, Tju was required to learn how to scuba dive for the two-month long shoot. The role helped her tap into an emotional state of desperation, while filming for long periods of time inside a tank of water. Extreme focus is required for acting underwater, because there are plenty of other variables to worry about besides performing. “It felt like I wasn’t acting sometimes, even though that’s my job,” says Tju. “It was that challenge that translates in the movie because what they’re going through is unlike anything else.”

She’s also working on the second season of the thriller series “Light as a Feather.” The show follows the style and tone of a traditional American teen drama series—but with a twist. Drawing inspiration from the childhood game, “light as a feather, stiff as a board,” the series transports audiences from grim graveyards to the halls of high school. Tju plays the role of Alex Portnoy, a queer Asian American woman. It’s a role that she finds a lot of pride in. “It’s just as important to play this character as any other straight character, because at the end of the day, she’s human,” Tju says. “Being gay or being Asian doesn’t define her.”

Throughout her time in the industry, which began when she was just six, the 23-year-old from Chino Hills has watched the Hollywood landscape change for Asian Americans. She recalls the lack of diverse and nuanced opportunities in the early days of her career. “Before, if I were to get a role, I was the smart girl or I was just the daughter of an Asian actor,” says Tju.

But Tju is hoping to redefine the landscape on her own terms. She’s seeking opportunities to return to her comedic roots in the future. “I’d love to be able to go back and forth between [dramas and comedies] like Steve Carrell or Emma Stone does,” Tju says. “But at the end of the day, I just really want to tell good stories, and be a part of a good project with good people.” 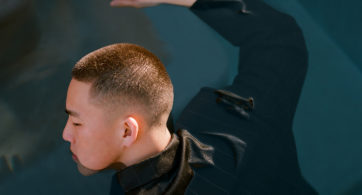 Flipping through the pages of Andrew Kung’s book, “The All-American,” feels almost like looking into a bejeweled, decadent wonderland—if that wonderland was populated solely by Asian American men. From a […]