If you’re on top of your movie news, you might have heard about a new film starring Sandra Oh, focusing on mother-daughter relationships taken to monstrous proportions. Sound familiar?

In addition to a viewing of the film, the evening also included a red carpet reception. Talents like Nicole Kang, Celia Au and Abraham Lim discussed what makes Oh such an iconic actress. “She really paved the way for a lot of us Asian actors in the industry,” said actress Debbie Sath.

For a recap of the red carpet, watch the video above.

After the screening, Phil Yu and Jeff Yang joined Shim on-stage for a Q&A session. Keep an eye out for our full video recap, coming soon!

Guests then headed down the street to Star Night to enjoy a smorgasbord of Korean food and drinks, as well as a book signing with Yu and Yang. The two recently published their nonfiction book “Rise: A Pop History of Asian America from the Nineties to Now,” a copy of which was given to every guest. 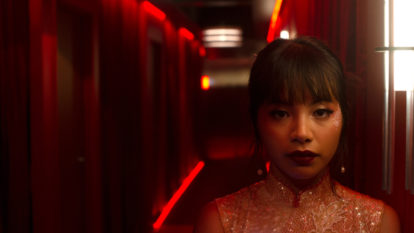 The actress discusses her favorite parts of playing April in the sci-fi film, which premieres today, March 18.