On Sunday, passengers of an overbooked United Airlines flight in Chicago watched a bleeding man being forcibly dragged out of a plane by a police officer.

The unidentified man in the now-viral videos is taken by his arms, screaming in protest as he’s wrestled out of his seat, in videos shared via social media by passengers. Horrified onlookers berate the officer, yelling, “Oh my God! Look at what you’re doing!”

The dragged man later runs back, still bloody, repeating, “I have to go home.” He was later removed and tended to by a medical crew.

@United overbook #flight3411 and decided to force random passengers off the plane. Here’s how they did it: pic.twitter.com/QfefM8X2cW

@united @CNN @FoxNews @WHAS11 Man forcibly removed from plane somehow gets back on still bloody from being removed pic.twitter.com/njS3nC0pDl

The flight was headed to Louisville and delayed for two hours. The Louisville Courier-Journal later reported that a passenger, Audra D. Bridges, said the man said he was a doctor who had patients to see the next morning and had refused to leave willingly.

According to Bridges, the manager warned the man security would be called if he did not leave, and the man said he would call his lawyer. Security officers came to speak to him, but he refused. Then a third officer came, and, Bridges told the Courier-Journal, “threw the passenger against the armrest before dragging him out of the plane.”

“[United] randomly selected people to kick off so their standby crew could have a seat,” Bridges wrote on her original Facebook post with a video of the incident. “We are all shaky and so disgusted.”

“We had a customer who refused to leave the aircraft. We have a number of customers on board that aircraft, and they want to get to their destination on time and safely, and we want to work to get them there,” Hobart told the Times. “Since that customer refused to leave the aircraft, we had to call the Chicago Police Department, and they came on board.”

In a Twitter statement, United CEO Oscar Munoz wrote: “This is an upsetting event to all of us here at United. I apologize for having to re-accommodate these customers. Our team is moving with a sense of urgency to work with the authorities and conduct our own detailed review of what happened. We are also reaching out to this passenger to talk directly to him and further address and resolve this situation.”

Overbooking caused United to kick off 3,765 passengers off flights last year, according to the Associated Press, out of some 40,000 booted from all U.S. flights.

The man has not yet been identified. 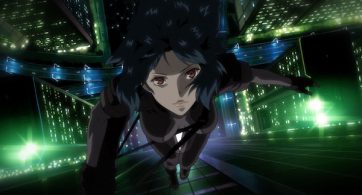 As reported by Kotaku, publisher Kodansha and animation company Production I.G. have announced the production of a new “Ghost In The Shell” anime series. No further details — including […]