Karen Chen’s autobiography just hit the book shelves. Imagine what she can write about if she wins an Olympic medal in February.

The defending U.S. women’s figure skating champion authored the book “Finding the Edge” with the help of Natalie England over the past few months. Chen calls it a chance to “look back on my memories and mini-accomplishments.”

At age 18, one would hope Chen will have many more achievements and memories worth the telling. Beginning with defending her crown at nationals in January, and then onto the biggest stage, the Pyeongchang Winter Games.

To do so, Chen believes she needs to reach back into her not-so-lengthy past.

“I want to channel my fearless younger Karen Chen,” she says. “I want to be that Karen again.”

For much of this season leading up to the Olympics, she hasn’t even been the Karen of last year.

“It’s been an up-and-down roller coaster,” she says, noting that she had disappointing performances at Skate Canada and Skate America, coming close to replicating her poor 2016 results in Grand Prix events, after which she peaked by winning the U.S. championship and finishing fourth at worlds. “I didn’t want there to be the ups and downs, that’s not what I had in mind for this year. The whole thing has to be a learning process: how to deal with nerves, to find the right balance.”

Despite her weak placements in the Grand Prix competitions and a knee problem that bothered her last week at Lake Placid, Chen remains a favorite to qualify for the Olympics. Her grace and precision, when she is on, can’t be matched by any of the other young American women who will be in San Jose for nationals. Only veteran Ashley Wagner, who is having her own struggles this season, can match Chen for the overall package needed to contend against the strong Russian and Japanese women and Sochi bronze winner Carolina Kostner.

Chen made the interesting but hardly unprecedented decision to stick with her two programs from last season, although it took plenty of back-and-forth discussions with coach Tammy Gambill and choreographer Mark Pillay. Such strategy worked for Evan Lysacek when he won the 2010 gold medal in Vancouver.

“My short program was very special to me,” Chen says of “On Golden Pond,” which helped propel her to the national title. “I had such a connection with the music and the feeling of skating it.

“But it is the Olympic year, so the thought was to do something bold. So we tried the new programs and we had some success with them. But they were lacking that spark.

That meant also returning to her free skate to “Jealousy Tango,” albeit with changes in footwork and some sequences and jump passes.

Things haven’t quite clicked in competition, though. Chen didn’t qualify for the Grand Prix Final — no American woman did — and her next test is the big one: defending at nationals, where a top three gets you onto the Olympic team.

Chen expects as tough an event as any she’s skated in.

“This is my first time going for the Olympics, going for my dream,” she says. “It’s going to be really intense; everyone wants that spot on the team. It’s definitely hit me that it’s going to be hard to get. So I have to use that desire and determination and energy to boost my performance instead of thinking of it as pressure.”

Should things go as Chen hopes, well, it could make for a few more chapters to add to “Finding the Edge.”

“I hope it can inspire children and young athletes,” she says. “I hope they can learn about the injuries and the obstacles they must overcome and it helps motivate them on their journey.” 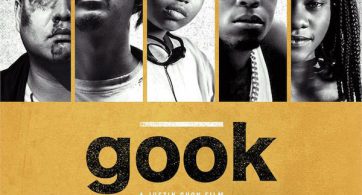 Last week, the Film Independent Spirit Awards revealed its list of nominations. Among the nominees is Chinese indie filmmaker Chloe Zhao, whose film “The Rider” is nominated for Best […]