As some of you may already be aware, Hollywood has a long history of “racebending” characters of Asian descent. Remember, The Last Airbender and Emma Stone in Aloha?

Yellowface is a form of theatrical makeup that non-Asian actors use in order to look like a person of East Asian descent. It dates as far back as the 18th century in theater and the early 1900s of the silent film era. Some notorious examples of yellowface are Mary Pickford in Madame Butterfly, Boris Karloff in The Mask of Fu Manchu and Nils Asther in The Bitter Tea of General Yen.

To kick things off, BuzzFeed showed a clip of Marlon Brando acting as a Japanese interpreter in the 1956 film Teahouse of the August Moon. Needless to say, the performance made the viewers cringe.

Next, the group watched Mickey Rooney’s performance as I.Y. Yunioshi in the 1961 classic Breakfast at Tiffany’s. Not even the beauty and grace of Audrey Hepburn could erase the uneasiness the viewers felt while watching Rooney yell in a terrible Japanese accent. Many of the viewers commented that Rooney was more of a “political cartoon” and did not look human.

“This guy could have been an orc in The Lord of the Rings,” quipped one viewer. “That’s how much makeup he has on right now.”

The group also watched more recent cases of yellowface, including the Wachowskis’ sci-fi film Cloud Atlas and an episode of CBS sitcom How I Met Your Mothers. At the end of the reaction video, the viewers agreed that Hollywood does not have an excuse to continue using yellowface, as there are plenty of Asian actors to cast in film and television.

Will the Real Hapa Please Stand Up? 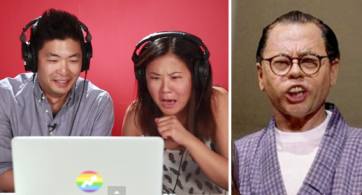 Try as you might, there’s really no way to justify yellowface. Some argue that old films only used it for comedy purposes, but when we see non-Asians dressed up in […]