Margaret Cho isn’t one to shy away from conversations on any topic. If anything, she hits them straight on. In a new satirical video for Funny or Die, the Korean American comedian applies her razor-sharp wit to Hollywood’s double standards and sexism.

Cho leads a group of female writers, including Ali Wong, at a major television network behind a new show. The writers discuss character options for “Dan the DILF,” the gender-swapped version of the “hot wife” on their show. After the network says they want to see more character depth in the male lead, the team has to brainstorm ideas that will appeal to the male demographic.

“Fifty-two percent of [our] audience is male, or whatever,” Cho says offhandedly. “So they want us to beef up Dan’s character. Maybe give him a little hobby.”

The team continues brainstorming (having a “hot guy friend,” stand up comedy, catch phrases) before asking poor Barry what he thinks. 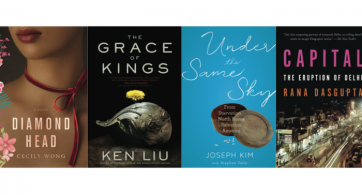 DIAMOND HEAD When Chinese-Hawaiian American author Cecily Wong was a child, she came upon her mother crying after a phone conversation arguing with her own mother in Hawaii. She […]