Following last night’s Fresh Off The Boat episode, Randall Park played the harmonica and fixed his G-string in the fifth episode of the hidden-camera TV show, Repeat After Me.

Executive produced by Ellen Degeneres, Repeat After Me involves host Wendi McLendon-Covey instructing celebrities, via remote ear piece, to interact with everyday people who are unaware that they are being filmed on hidden cameras. The celebrities are usually required to say or do comical, nonsensical things. The ruse is only revealed to the unsuspecting target at the end of the video.

In the episode, Park is scheduled to get a manicure in his waiting room. As soon as the manicurist enters the room, Park is instructed to say, “Randall Park needs to get his nails did.” And he does so, with swagger.

While pretending to have laryngitis, the Fresh Off the Boat star takes on a series of embarrassing challenges: asking the manicurist to call him a “pretty pony,” requesting bedazzled nails, drinking a bowl of water mixed with tea tree oil, crying while playing the harmonica and fixing his fictitious G-string by jiggling his legs.

Needless to say, Park nailed it. Mad props to Adrianna, the manicurist, for being such a good sport and having the patience of a saint.

You can watch the full episode on Hulu. Meanwhile, check out some clips from the episode below: 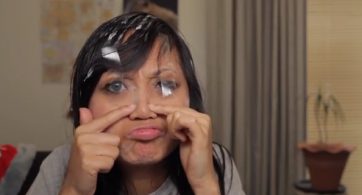 Joy Regullano, the comedian behind the  White Fetish viral video, is back. This most recent video parody, which is called “How To Look More White! Self-Hating Asian Party Look” […]