At first glance, Brandun Lee is an average young man. The 5-foot-7, 143-pound senior at La Quinta High School shrugged his shoulders with a smirk on his face when this writer asked him to explain how his typical day usually unfolds.

His favorite class? “Geology,” he said, laughing. “I took that class last year and that was the only class I enjoyed, because it was easy.”

Lee’s down-to-earth, laid-back personality is likely to fool anyone who doesn’t know that he may just be the fiercest pound-for-pound competitor in the country. The 17-year-old out of Coachella, California, began boxing when he was just 6. Last year, Lee inked a six-figure deal with Cameron Dunkin — a revered boxing manager known for guiding Stevie Johnston and Danny Romero to become world champions — to turn professional after conquering the country as the No. 1-ranked amateur boxer for junior men.

When asked if turning professional has changed his life, Lee said: “Not really. Maybe a little bit on social media.”

In January, he made his pro debut at the 2300 Arena in Philadelphia, where he knocked out 22-year-old Christopher Johnson after just a minute and 33 seconds into the welterweight bout.

“I could’ve finished him quicker in a prettier way,” said Lee inside the Coachella Valley Boxing Club where he trains daily. The gym is owned by the legendary Lee Espinoza, whose glitzy list of trainees include the Diaz brothers, Antonio and Julio, Steve Quinonez and Rudy Dominguez.

In March, Lee returned to the same arena just two months later for his second pro fight against 26-year-old Seth Basler. That time, he won in just 90 seconds.

“When I started as a kid, the Mexican trainers and boxers were like, ‘Oh, look at that little Asian kid,’” Lee said. “Well, after about three months, no one wanted to fight me. Since then, I haven’t looked at it as a hobby. It’s my career. There are little boys who want to be policemen and firefighters. For me, it was all about boxing. To this day, that mentality hasn’t changed. I’ll always want to be a boxer.”

For Lee’s father Bobby, who trains his son, seeing his boy morphed into today’s top boxing prospect has been writing on the wall. Brandun won a junior national championship when he was 9. Two years later, prestigious boxing publication The Ring Magazine featured an 11-year-old Brandun, who had already won three national junior championships by then, labeling him a prodigy.

“When I saw his first fight, he was just a natural,” said Bobby, who has also trained his older son Jhong, 26, once a bright amateur boxer. “He’d do stuff that we’ve never worked on. That told me that he wanted to go further with this. Whatever he wants to do, he’s going to do it and I’m going to be there for him.”

By the time Brandun and Jhong were born, it was only natural for them to eventually embrace the sport. Their maternal grandfather was a Mexican American amateur boxer, while their uncle once competed in qualifying tournaments to make the U.S. national team for the Olympics.

“Southern California boxing is dominated by Mexican Americans,” Bobby said. “They called Brandun chinito, a little Chinese kid. Once they got into the ring, he beat everybody. We finished California. We finished Nevada, Oregon and Washington. We cleared the entire West Coast. We had to go to different states just to get a fight.”

An exceptional success early on did come at a cost. Admittedly, Brandun acknowledged that he didn’t have much of a childhood. Birthdays were often a mere formality, as boxing always took priority. “I fought at least three times on my birthday,” Brandun said. “To this day, I don’t go to parties, because that’s not safe. What if something happens and I hurt my hand?”

Bobby also admitted to making mistakes while training his older son Jhong. The patriarch often over-trained him and eventually ran him into the ground. Later on, Jhong was diagnosed with an enlarged heart and eventually fell out of the sport as life off the ring led him astray. With Brandun, Bobby’s biggest challenge has been knowing when to take a step back.

“I don’t over-train Brandun,” Bobby said. “I don’t push him. That’s a mistake I made with my older son. I made him hate the sport. That was my fault. I made a lot of mistakes. When Brandun first started boxing, I only taught him how to throw jabs for the entire first year, so that he could learn how to be creative with his left hand. I taught him step by step. I don’t have no more sons after this one. I had to be perfect.”

That is why both Bobby and Jhong, who now works while attending school after leaving boxing for health reasons, have constantly been self-conscious about staying away from the danger of levying a sense of responsibility on Brandun to realize the family dream.

“When there is a fight on TV showing a fight that will decide the world champion, I’m not going to tell him to come down and watch the fight,” Bobby said. “I don’t even talk about boxing that much. When I’m home, I’m his father. When I’m at the gym, I’m his coach. That’s the ethic that I’ve been committed to. It’s worked out pretty well.”

To Brandun, though, the past family struggles are more of a motivation than pressure.

“If my brother can’t do it, I want to do it for him,” said Brandun. “I know he might not look at it that way, but I do. I have that mentality. If you say I can’t do it, I’ll do it. If you hit me one time, I’m hitting you five times. I learned that from my brother.”

Brandun also understands that training under his father puts him in good hands.

“No one’s going to care about me like my dad does,” he said. “Another coach isn’t going to look out for me like my dad does. I know I can’t live a normal life, but that’s totally fine. It’s a lifestyle now. It’s about maintenance and being conscious.” 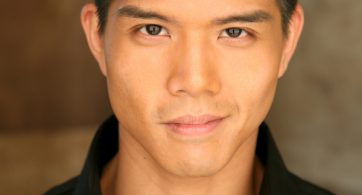 Actor Telly Leung is set to take on the title role in Broadway’s production of “Aladdin,” which will begin June 13. Leung succeeds Adam Jacobs, who left earlier this […]