Ramona Young almost lived a totally different life than the one in front of the camera she has now. Before acting, she was preparing for a life as an educator, for years having been an after-school tutor and a teacher’s aide for special education. She even took graduate school classes for it. But one day while in the classroom, she decided to quit and be something else.

Trying out new identities was nothing new for Young. As the daughter of a U.S. Navy mom, she moved around the country a lot, attending more than 40 schools. Amid the chaos of constantly moving, she found peace through acting, with the role of the “new kid” as her first gig.

Each relocation, she never knew what kind of reception she’d get. At one school, her classmates might treat her like a popular kid, and then at the next she might be treated as an outcast, all the while being herself most of the time. Young then realized that she could use the power of theater to manipulate their perception of her. If she didn’t like something, she would change it by acting differently. Each new environment gave her the opportunity to be whomever she wanted to be. “Sometimes I would tell people that I had a different name. People would buy that, and they would call me by this different name,” Young said. “Being someone else is just something fun to experiment with.”

She dreamed of pursuing acting as a career, against her parents’ wishes. At the age of 14, Young moved from Utah back to California (where she was born) to find her place onscreen. She booked her first part on the ABC sitcom “Super Fun Night,” and went on to appear in the zombie comedy-drama “Z Nation,” the Netflix series “Santa Clarita Diet” and the film “Blockers.” In “Blockers,” she played Angelica, an attractive gay teenager. “For [Angelica], our director let us improvise a lot, so a lot of the character was really me,” Young explained. She said her biggest goal with any role is to play every character as truthfully as she can.

Last July, Young nabbed the series regular role of Mona Wu on “Legends of Tomorrow,” the CW’s DC-based superhero show, now in its fourth season and recently renewed for a fifth. An expert in the world of magical creatures, Mona grows into her own and becomes a kick-ass superhero. The character was named after Young herself, but that wasn’t the only reason why she identified with the character. “[Mona] lives in a world of fantasy, which I kind of relate to,” Young said. “Her parents were kind of harsh on her, too, with what she wants to do.”

Young said that being on “Legends of Tomorrow” has been one of the best acting experiences that she has ever had. “Everyone was so kind to each other, and everyone laughed a lot,” Young said. “We had a great time on set.”

The next season of “Legends of Tomorrow” is set to begin shooting later this year. In the meantime, Young is trying on a new hat: She’s working on writing a feature of her own. “I love having a new experience, whatever that is.” 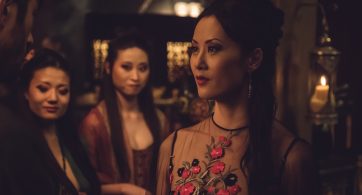 Somewhere in Capetown, South Africa, is a dusty city dotted with saloons, opium dens and brothels. Though it might seem a little out of place in a country better […]