The latest installment in Warner Bros. Pictures and Legendary Pictures’ monster series, “Godzilla: King of The Monsters” crashes into a theater near you on May 31st.

Starring Kyle Chandler (“The Wolf of Wall Street” and “Argo”) alongside Vera Farmiga (“The Conjuring”) and Millie Bobby Brown (of “Stranger Things” fame), “King of the Monsters” sees Godzilla facing off with some of the most legendary monsters from pop culture history, including Mothra, Rodan and three-headed dragon King Ghidora, Godzilla’s ultimate nemesis. As these supersize creatures challenge one another for dominance, their destructive battle leaves humanity struggling to survive in apocalyptic conditions. At the center of the story is crypto-zoological agency Monarch, whose members lead the fight against the monsters.

Directed by Michael Dougherty (“Krampus”), the film introduces plenty of fan-favorite monsters to the already well-stocked Warner Bros. ‘Monsterverse.’ Check out the final trailer below: 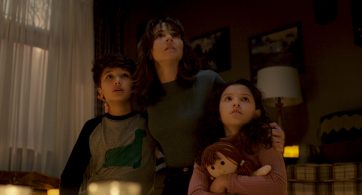 Watching “The Curse of La Llorona” is like eating gentrified Mexican food. The cultural inspiration is there and the proper ingredients are present but you can’t shake the feeling […]