A tall, dark stranger wanders off a boat filled with Chinese immigrant workers and surveys his destination, San Francisco in 1878: a hectic tableau buzzing with protesting Irish workers, Tong gangsters looking for fresh recruits and bewildered fellow travelers. When one of the hateful immigration officers picks on a Chinese man, saying “Hey Ching-Chong, have you smelled yourself?” and throwing him to the ground, a slippered foot is defiantly set down. The foot belongs to Ah Sahm (played by a bearded and muscular Andrew Koji), who defends the weaker man against the officer. When he defeats all of the officers with his expert kung fu moves, he establishes his power and his skill. Ah Sahm is the One.

Inspired by the writings of Bruce Lee, “Warrior,” which premiered on Cinemax on April 5, tells the story of kung fu fighter Ah Sahm, who can miraculously speak English because he had an American grandfather. (Both of my parents speak Korean, and my Korean sucks. So go figure.) Aside from how accentless Ah Sahm’s English is, “Warrior”’s pilot is rife with other problems. The production value is cheesy and the transitions from Chinese to English are jarring.

With representations of Asian Americans still so limited, every opportunity to prove that our stories are worthy of screen time is critical. So much is at stake in portraying the fascinating rise of Chinatown gangs before the passage of the virulently xenophobic Chinese Exclusion Act of 1882. So do we tout “Warrior” because of its abundant Asian American casting and ignore its trite and hollow writing issues? Or do we hold it to a higher standard because so much is at stake?

Thankfully, we don’t have to make that decision just yet because, if you can make it past the pilot, the series vastly improves with each episode. Koji emerges as a truly charismatic and compelling protagonist, with ’70s kung fu movie-worthy skills. He and other cast members like the wiry troublemaker Young Jun (Jason Tobin) and the homicidal maniac Bolo (Rich Ting) engage in brutally violent fight scenes that will have you cringing. While Penny, the white lady love interest, gets to be kind and intelligent, “Warrior”’s Asian American women, the deceitful Mai Ling (Dianne Doan) and the wonderfully sinister brothel owner Ah Toy (Olivia Cheng), are cunning women of ill repute.

Fortunately, Mai Ling and Ah Toy become more fleshed out characters along with the others, like the corrupt police sergeant who’s addicted to gambling. The shady officers are the least of Ah Sahm’s problems as he must navigate the Wild West, with a complex social order that includes opium dens, greedy industrialists, ruthless Irish labor unions and two warring Tong clans, the Hop Wei and the Long Zii. Ah Sahm is recruited by the Hop Wei Tong, who wear Western-style waistcoats and ride around in darkened carriages, while the Long Zii sport baggy changshan and the queue. After so many decades of film and TV that represent the Chinese inhabitants of the Old West as humble servants or faceless coolies, it’s refreshing to see a truly masculine Asian American leading man who doesn’t back down and has a shot at getting the girl. Having served the Green Hornet as Kato the manservant, Bruce Lee would have been proud. 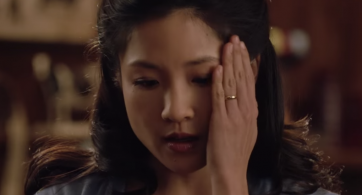 For Mother’s Day, we’re toasting our favorite API mothers and maternal figures on the small and silver screen. With mamas from the groundbreaking “Joy Luck Club” to the hilarious […]