And as we come away from the Cannes film festival, where South Korean films premiered to applause and sold internationally, we’re thankful some South Korean films have found their way onto our computer screens. While we still have to wait another year or so for the 2017 Cannes debuts, there are still a few notable films that are available to stream on Netflix:

In its early stages of negotiating an American remake, “The Wailing” is a must-watch for those who love being terrified by the spiritual horror genre. A shaman, a ghostly woman in white and exorcism are a few of the horror tropes “The Wailing” features, but it really isn’t your typical horror film. It’s moodier and scarier with a deeper thematic message about faith and evil. The Hollywood Reporter has praised the film as “a darkly unsettling story […] masterfully told”.

A mysterious Japanese stranger arrives in a secluded small village of South Korea and the village’s inhabitants start coming down with strange symptoms — rashes, boils, succumbing to a murderous rage, and finally death. The town’s policeman and his partner investigate, suspecting the stranger, who seems…not of this world.

Imagine this terrifying scenario: You’re alone and cold, trapped in a collapsed tunnel surrounded by rubble and dust, a cellphone with 78 percent battery life, and for food, two bottles of water and a fruit cream cake that will soon expire. The rescue date keeps changing. Days turn into weeks, resources run out, your will runs dry. You’re forced to face the reality that you will probably never be rescued. On top of that, the country is dumbly incompetent in a disaster crisis, with leadership caring very little about the worth of a human life. To paraphrase a government official in the film who argues for conservation of funds and resources for the search for the trapped Lee Jung-soo (Ha Jung-woo): “That is only one person down there.”

“Tunnel” is a suspenseful survival tale with unexpected dry wit, layered with biting commentary on South Korea’s government infrastructure. The film is packed with powerful and unexpectedly hilarious performances, especially by Oh Dal-su, who plays the only government official in South Korea with a heart.

A father (Gong Yoo) and his estranged young daughter, along with a band of strangers, journey across Seoul on a train, fleeing from a bloodthirsty swarm of deadly zombies with hopes of making it to a safe zone in Busan alive. Not only do they have to take on flesh-hungry terrors, but they also face a bigger battle against the egotistical upper class and dog-eat-dog-minded citizens who would rather save themselves than keep their humanity intact.

The film premiered in Cannes last year and found incredible success both overseas and in its homeland. Your heart will thump and tears will swell in this unpredictable thriller.

This is a genre-bending mindf–k of a film. When it ends, you’ll sit staring at the rolling credits, wondering: What the hell did I just watch? But give it a minute. You’ll appreciate the grit, the mystery and the panache of director Park Chan-wook, who had the balls to tell this eerie tale of a man kidnapped and imprisoned for 15 years then set upon a changed world and forced to find out why this punishment was brought upon him. It will never be the reason you suspect. (Hint: Not a film appropriate for Father’s Day.)

It went through an American remake in 2013, directed by Spike Lee, starring Josh Brolin and Elizabeth Olsen, but the film didn’t have the same kind of chilling catharsis and received unfavorable reviews. You need only to watch the original.

The first feature from director Bong Joon-ho is an entertaining, dark-humored tale of an everyday man who snaps…the necks, that is, of dogs who bark too much and piss him off. An aspiring professor with a pregnant wife, facing a career lull, he’s tormented by the noisy dogs in his apartment complex that keep him awake at night. So, he goes on a killing spree of these poor, fluffy creatures who, as the movie points out, are usually treated a lot better than most humans. And on his tail (pun intended) is the determined apartment complex’s manager (Bae Doo-na, whom you may recognize from “Sense8”) who wants to catch the culprit.

Here’s another Bong film. In a dark, ominous room, an American pathologist orders his Korean assistant to pour out toxic chemicals down the drain. (Fun fact: The pathologist is played by Scott Wilson, who was Hershel Greene in the hit zombie TV series “The Walking Dead”.) Years later, a giant amphibious monster emerges from the Han River, rampaging the city. In its destruction, it grabs the youngest daughter of the Park family, a band of misfits comprising a dim-witted father, an archery champion sister, an alcoholic, workaholic brother, and their elderly grandfather. The family of fools embark on a mission to save their beloved little one.

Under the guise of an exciting monster movie, “The Host” subtly inputs social commentary on South Korea’s underprivileged and overlooked citizens, and the oppression of American imperialism. And as seen in “Tunnel,” we again see how the country blunders and struggles in a crisis.

“Mother” embodies the boundless love a mother has for her child in epic proportions. Veteran actress Kim Hye-ja plays the titular role as a mother to a grown son with an intellectual disability. It’s the two of them against the world. She dedicates her life to him, sometimes crossing the boundaries of what’s considered normal mother and son behavior. She still attempts to hand feed him, and they sleep together nightly. When he’s accused of murdering a local high school girl by the town’s incompetent and lazy policeman, who calls it a closed case, the heartbroken mother makes it her mission to uncover the truth and free her son.

The Hollywood Reporter raves the film — the third on this list by director Bong — is a “superb murder mystery, with twists coming thick and fast,” comparing Bong’s work to the great psychological mystery auteur, Alfred Hitchcock. The film also has the best opening scene — it’s cinematically beautiful but strange and haunting, kind of like the film itself. You can’t take your eyes off of Kim.

What will you be watching? 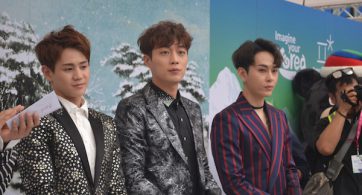 In the middle of a sultry June day, an expectant crowd waits for their next move. YouTuber JuNCurryAhn (née Jun Sung Ahn) directs their dance steps to TWICE’s “Signal” […]