Two of the most fabulous, star-studded events happened back-to-back this year, and with them came a flurry of hot red gowns, sexy cleavage and swoon-worthy, fitted black suits. At the Emmys, ABC’s Modern Family predictably took home the golden statue for an outstanding comedy, and actor Bryan Cranston deservedly stole the show with his win as the outstanding lead actor in Breaking Bad; and the VMAs–let’s be real–should have been alternately titled “All Hail Queen Bey.”

Nominations and winners aside, what we fashionistas really look forward to are the unique looks that grace the red carpet. Here’s a rundown of the styles these Asian American celebrities wore at this year’s MTV VMAs and Emmys.

1) Actor and singer Darren Criss, whose roots are half-Filipino, kept it simple at the VMAs with black slacks and a mauve blazer, all pulled together with sleek sunglasses.

5) You may not have known that this funny man came from Asian roots, but actor and comedian Fred Armisen is a quarter Japanese, inherited from his father’s side. Standing next to Carrie Brownstein, his partner-in-crime on IFC’s hilarious Portlandia, Armisen looked classy in a black suit with a dark gray dress shirt.

7) This hottie came out from behind the camera and swooned all of the Internet when he graced the stage to accept the Emmy for “Outstanding Director” for HBO’s True Detective. Half Japanese and half Swedish, director Cary Joji Fukunaga looked simultaneously manly and sweet in crisp black-and-white attire with his hair in braids.

8) Last but certainly not least (and definitely the most little), half-Korean American actress Aubrey Anderson-Emmons, who plays the snarky Lily on Modern Family, donned an appropriate navy-blue laced dress with black tights and patent black flats. 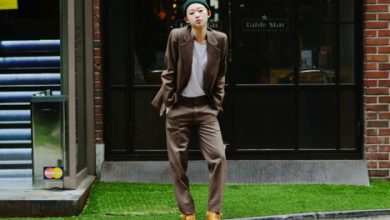 To the annoyance of my husband, I am one of those women who’d rather peruse the men’s section on shopping excursions; it’s not a matter of being anti-frill […]