Sandra Oh and Darren Criss had another big night at the 24th Annual Critics’ Choice Awards on Sunday, while “Crazy Rich Asians” picked up a trophy for Best Comedy.

Just a week after winning her Golden Globe for Best Actress in a TV Drama, Oh received the Critics’ Choice win in the same category for “Killing Eve.” During her speech, she thanked her co-star Jodie Comer and said being on the show has “been one of the great privileges of my life.”

Criss also picked up another Best Actor in a Limited Series award for playing the serial killer Andrew Cunanan in “The Assassination of Gianni Versace: American Crime Story.” “I would like to take this as an opportunity to apologize for any future lackluster performances,” Criss said on stage. “I hope that when that happens, you will remember this moment, because I certainly will.”

Meanwhile, surrounded by the cast of “Crazy Rich Asians,” producer Nina Jacobson gave an emotional speech, recalling a time when her white bosses would tell her that “white dudes can’t be counted on to identify with anyone who doesn’t look or live like they do.” It was, she said, “a bunch of bullsh-t.”

“Representation is power and our movie, like so many of those nominated today, reminds us that audiences are hungry to see that power redistributed,” Jacobson said.

All three are nominated for the Screen Actors Guild Awards, which will take place on Jan. 27.

Winners of the Critics’ Choice Awards are determined by the Broadcast Film Critics Association and Broadcast Television Journalists Association. 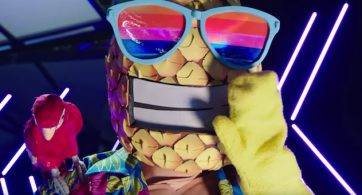 This is a show that is equal parts Hollywood, “American Idol,” mystery and fever dream. And it just might be America’s new favorite guessing game. “The Masked Singer” is […]