Yesterday, PolyMic.com released a story titled “28 Most Iconic Feminist Moments of 2013.” We’re not going to lie, we definitely jumped and cheered for many of these moments.

Of course, we were proud that these individuals helped women take a much-needed step forward, but what really caught our eye was the amount of Asians that made their way onto this list. We decided to take a closer look at these women.

Needless to say, we are awfully proud of the Asians who took part in the most iconic feminist moment of 2013. To check out the full list, click here.

1. Bollywood Actress Slammed Down a Reporter Who Criticized Her Views on the Patriarchy

When a female reporter asked Mallika Sherawat to defend her comment that India is “regressive and depressive,” she ripped her apart. “As a woman, I should lie about the state of women that’s in our country?” the actress replied. When the reporter wouldn’t give it up, the Bollywood actress just started dropping knowledge: “With female feticide, infanticide happening on an almost daily basis; with gang rapes making the headlines of almost every newspaper; with honor killings …” Her response came only a few weeks after the head of India’s Central Bureau of Investigation said if rape can’t be prevented, it should be enjoyed.

So who is this fiesty woman who dropped some knowledge? That would be none other than Indian actress and model Mallika Sherawat. Quite like her actual personality, Sherawat is known for playing characters with a bold attitude. Currently, the 37-year-old actress is trying to cross over to Hollywood. Thus far, she has been in two Hollywood films, Hisss and Politics of Love, and was featured in a Bruno Mars parody video.

Because of her time spent in Los Angeles, as well as her comment that India is regressive for women, Sherewat received a handful of negative criticism for those who felt like she did not like India. In the following video, Sherewat says exactly whats she meant by that and calls attention to a number of very important issues.

The description also calls attention to Central Bureau of Investigation chief Ranjit Sinha who faced a lot of heat for comparing rape to gambling and stating “if you can’t prevent it, enjoy it..” Read more on his controversial statement here.

After the fatal, brutal gang rape of a student caused international uproar and mass protests, the Indian government took drastic action. On March 19, the parliament passed an anti-rape bill that doubled the punishment for rapists. “Under the changes, the minimum sentence for gang rape, rape of a minor, rape by policemen or a person in authority will be doubled to 20 years and can be extended to life without parole,” BBC reported.

This set the stage for a global conversation about sexual assault and the persistence of rape culture across borders.

According to the Atlantic, three woman in India are raped every hour and yet the country has one of the lowest conviction rates. Thankfully, the discrepancy has been given a little more (deserved) attention. The new anti-rape bull includes double the amount of punishment for rapists. The minimum sentence is now 20 years and can be extended to life without parole. Additionally, voyeurism and stalking is now punishable by law.

3. GoldieBlox Proved That Girls Can Be More Than Princesses

Who knew feminism has so much viral potential? For decades, we’ve been targeting women and girls with pink princess junk, but as it turns out, telling females they can be anything can also work! When the good folks at GoldieBlox noticed that women only make up 11% of engineers in the world, they decided to reverse that trend. “By designing a construction toy from the female perspective, we aim to disrupt the pink aisle and inspire the future generation of female engineers,” a statement on the company’s website says. “We believe there are a million girls out there who are engineers. They just might not know it yet. We think GoldieBlox can show them the way.” Well, I know what to give my niece for Christmas this year!

Debbie Sterling, a female engineer, realized that part of the reason many girls don’t grow up considering the engineering field has a lot to do with our childhood. Young girls don’t come home from the toy store with legos, lincoln blocks, or robots you to be built build for battle. They go home with dress-up barbies, build-a-bears, and fake make-up kits. Although there is absolutely nothing wrong with these toys, the problem is simply that the opportunity to go out and explore is not available. Many young girls never considered being an engineer simply because they were never programmed to have any sort of interest in the field. Sterling decided to change that.

She described GoldieBlox as “a series of interactive books + construction toys starring Goldie, a curious girl with a love of engineering.”

4. Mindy Kaling Exposed One of the Worst Double Standards for Women

In an interview with Parade magazine, Mindy Kaling made a brilliant point about the assumptions we make about women. “I always get asked, ‘Where do you get your confidence?’ I think people are well meaning, but it’s pretty insulting. Because what it means to me is, ‘You, Mindy Kaling, have all the trappings of a very marginalized person. You’re not skinny, you’re not white, you’re a woman. Why on earth would you feel like you’re worth anything?'”

Mindy Kaling is on our list of The Worlds 15 Most Followed Asian Female Celebrities on Twitter and happens to be one of Audrey’s cover girls. She talked more about her confidence and explained where it came from. “As confident as I feel,” she explained, “it takes an almost comically confident person to be able to say that they were destined to be in movies and television. I don’t think I was destined, but I think I am of the personality type where the rejection or odds of something doesn’t scare me. Maybe it was because my mom moved to Africa at 20 by herself, but there’s a certain fearlessness that runs in my family for things where there’s absolutely no reason to believe that it should work out. I get that from my parents.”

Check out the cover photo below.

5. Malala Made a Groundbreaking (and Very Feminist) Speech at the United Nations

On July 12, Malala Yousafzai celebrated her 16th birthday by delivering her first speech since she survived a bullet to the head by the Taliban. Her words inspired millions around the world, especially after she made some enlightening feminist statements like, “We cannot all succeed when half of us are held back.”

The teenage girl’s courage and grace left us all (including Jon Stewart) speechless. TIME magazine got it wrong because in our hearts, she was definitely the Person of the Year.

If you don’t know who Malala Yousafzai is, then you ought to learn up. Malala was only a young girl when she became an activist for rights to education and rights for women. At the young age of 11, she began blogging about her life under Taliban rule. This was so powerful that in 2009, a New York Times documentary was filmed about her life.

Her actions were seen as unacceptable and in 2012, Malala was shot in the head and neck by Taliban gunman in an attempt to murder her. The strong young lady survived and continues to fight for what she believes in.

6.  This Awesome Rape Prevention Video Parody From India Traveled ‘Round the World

This parody video created by All India Bakchod went viral around the world for its honest look at the worst persisting stereotypes about sexual assault. It features women using humor and sarcasm to point out the absurdities of rape culture. Given that a recent United Nations report found that two women are raped every hour in India, this video couldn’t come at a better time. Its reception was positive. The filmmakers told Al Jazeera that within a couple of days, they were already flooded with requests to translate the video into Hindi in order to reach a wider audience.

Known for her films Zindagi Na Milegi Dobara and Yeh Jawaani Hai Deewani, Bollywood actress Kalki Koechlin joined forces with TV presenter Juhi Pandey for the video AIB365: It’s Your Fault. This short is a brilliantly done satire on rape and the blame that is often placed on women.The video was made in response to the high levels of violence against women in India and the misconceptions over who is at fault.

The video begins with Koechlin saying, “Ladies, do you think rape is something men do out of a desire for control, empowered by years of patriarchy? You’ve clearly been misled by the notion that women are people too. Because let’s face it, rape is your fault.” If the satiric tone is not yet obvious, Koechlin goes on to say, “Scientific studies suggest that women who wear skirts are the leading cause of rape. Do you know why? Because men have eyes.”

The video continues by showing various articles of clothing which are unacceptable for women to wear, from skirts to a fully-covered astronaut suit. The video points out that women are to blame for rape regardless of what they wear simply because they are women.  Watch this entertaining and enlightening video below. 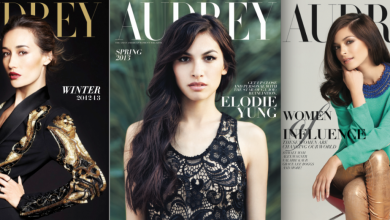 As 2013 inches closer to its end, we can’t help but think of the incredible year that Audrey Magazine has had. We’ve featured gorgeous and talented women on the […]