Yesterday, December 17th, Sony Pictures announced that they would not only cancel all advance/private screenings of Seth Rogen and Evan Goldberg’s The Interview, they have completely pulled the plug and will no longer release the film in theaters on Christmas day. In fact, the studio has no further release plans for the film at all.

As you may already know, all of this is in response to cyber attacks on Sony Pictures which resulted in a leak of countless private emails. The hackers, known only as “Guardians of the Peace,” then threatened to perform an “11th of September”-style attack on all movie theaters showing the film which portrays the assassination of North Korean dictator, Kim Jong-Un.

Sony released a statement on Wednesday:

In light of the decision by the majority of our exhibitors not to show the film The Interview, we have decided not to move forward with the planned December 25 theatrical release. We respect and understand our partners’ decision and, of course, completely share their paramount interest in the safety of employees and theater-goers.

Sony Pictures has been the victim of an unprecedented criminal assault against our employees, our customers, and our business. Those who attacked us stole our intellectual property, private emails, and sensitive and proprietary material, and sought to destroy our spirit and our morale – all apparently to thwart the release of a movie they did not like. We are deeply saddened at this brazen effort to suppress the distribution of a movie, and in the process do damage to our company, our employees, and the American public. We stand by our filmmakers and their right to free expression and are extremely disappointed by this outcome.

Some support this decision and claim that safety must come first. Others shake their heads in disappointment over Sony’s decision and point out that this cowardice gives hackers even more power to control. Many Hollywoods celebs have put in their two cents and it is clear that this news does not sit well with them.

This only guarantees that this movie will be seen by more people on Earth than it would have before. Legally or illegally all will see it.

Really hard to believe this is the response to a threat to freedom of expression here in America. #TheInterview – Ben Stiller (@RedHourBen) December 18, 2014

Saw @Sethrogen at JFK. Both of us have never seen or heard of anything like this. Hollywood has done Neville Chamberlain proud today.

What if an anonymous person got offended by something an executive at Coke said. Will we all have to stop drinking Coke?

THE INTERVIEW is now poised to shatter the world record for “spite viewings.”

Canceling “The Interview” seems like a pretty horrible precedent to set.

So SONY fight back by canceling The Interview, thus proving to the hackers that hacking & threats work very well? That may prove an error. – Neil Gaiman (@neilhimself) December 17, 2014

While I understand the necessity to pull The Interview, it makes me furious. Free speech is the most admirable tenet in our constitution.

EVERYONE! MAKE EVERY ATTEMPT YOU CAN TO SEE #TheInterview !!!!! WE CANNOT LET KIM JONG UN WIN! MAJOR THEATRES WILL NOT SHOW THE MOVIE NOW!! – Lucas Till (@lucastill) December 17, 2014

We do not negotiate with terrorists. We just do exactly what they say. – Damon Wayans Yunior? (@wayansjr) December 18, 2014

As Sony caves to cyber-terrorism & cancels The Interview, my column on why America needs to stand up to the bullies: http://t.co/X7JxNUFKf3 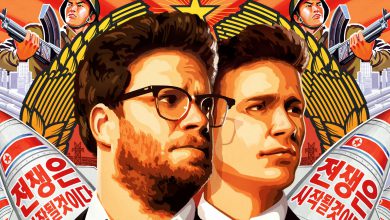 Audrey Magazine and KoreAm Journal will unfortunately be canceling the advanced screening of The Interview, as requested by Sony Pictures. We apologize for the abrupt cancellation and any inconvenience this may […]