In China, Daniel Wu has been a movie star and regular leading man for well over a decade, as both romantic interest and action hero. In returning home to America a couple years ago, Wu entered a completely different entertainment industry in which, when he became the executive producer and star of AMC’s “Into the Badlands,” his being an Asian American leading man made headlines across the country.

The critically well-received show has introduced most English-speaking audiences to Wu, who has now taken on his largest Hollywood film role to date with the upcoming “Tomb Raider” reboot.

Through the film, Wu said, he hopes to show mainstream audiences a character — an at-times brash, unfailingly loyal ship captain named Lu Ren who befriends Lara (played by Alicia Vikander), in her origin story, on her quest to find her father — who shirks Hollywood stereotypes.

The reboot of “Tomb Raider,” which comes more than 15 years after Angelina Jolie initially brought Lara Croft to life on the screen, is directed by Roar Uthaug and is based on the 2013 video game of the same name.

It’s taken Wu some time to understand the impact of his position as one of the industry’s few Asian Americans with his own show. At first, thrust into the ongoing diversity conversation through “Badlands,” and bombarded by reporters who came equipped with questions about representation and about where he saw his place in the dialogue, he had felt perplexed.

“I was like, ‘I don’t want to carry the weight of Asian America on my back,’” he recalled thinking. Diversity and race were never topics in China and Hong Kong, where he acted for 20 years.

Two seasons of the show helped transform how Wu thinks about representation on American screens. He’s heard from friends’ kids, and other young viewers, about being inspired to pursue acting, or to pursue the arts, after watching him as Sunny in “Badlands.”

Their stories reminded him of his own childhood growing up in Northern California as the son of Chinese immigrants. He’s experienced not having an icon to look up to. “Growing up, I watched the ‘Kung Fu’ TV series, with a white guy playing an Asian guy, you know what I mean? If you see it now, it’s really messed up. That’s why I never thought being in this business was an option for me,” he said, in reference to the 1970s show starring David Carradine, a white actor, playing a Buddhist monk named Kwai Chang Caine. “If I told my parents I wanted to act, they would say, ‘What are you talking about? There’s no Chinese people on TV. That’s not an option for you, so don’t think about that.’”

“But now these kids dream. To be able to be an example for young kids now, to make that an option for them, I’m proud of that,” he said. “I’m still not trying to carry all the hopes and dreams of Asian America. But I definitely respect the situation I’m in and definitely conscious and aware of it now.”

What that’s meant is taking on characters like Lu Ren, who first meets Lara when she comes searching for his father in Hong Kong. He’s a name that does not appear in the popular video game franchise on which the films are based. Wu said he was drawn to Lu’s three-dimensionality. “He wasn’t this token character,” he said. One of the first questions he asked about Lu after reading the script was whether it would need to be done with an accent. Wu said he wouldn’t have taken the role if it had.

“He’s truthful to being a Hong Kong person, but he’s not that guy you usually see [in films],” he said. “He wasn’t flat.”

As an added bonus, Wu filmed a lot of his scenes in Cape Town, a city he and his wife Lisa has frequented for years, and in which designers set out to recreate Hong Kong, another one of his homes. 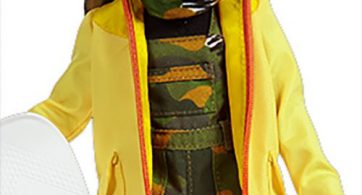 Olympic gold medalist and snowboarding prodigy Chloe Kim is getting her own Barbie doll! To celebrate International Women’s Day, the Barbie brand announced the release of 17 new dolls […]